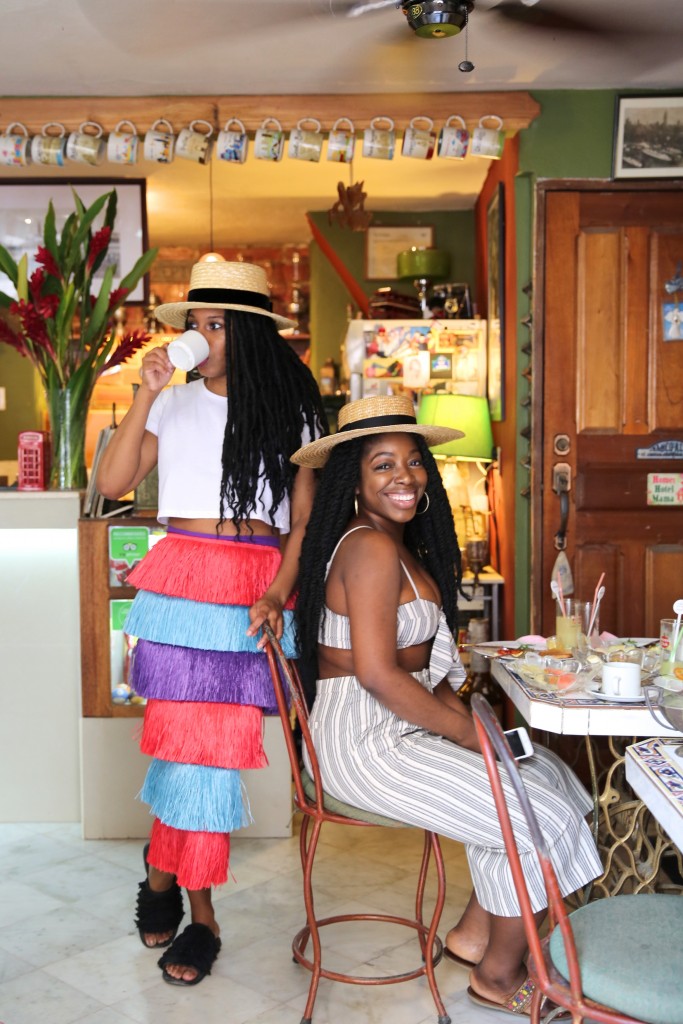 In the elevator of our building on Day 1, we met a Canadian gentleman who insisted we go around the corner to Cafe Arcangel for breakfast. It was some of the best advice we received during our stay. Cafe Arcangel’s entrance  is so tiny you could pass by it if you aren’t on the lookout for it. It’s a lovely place with old photos of the owners on the wall. A couple in their 60s who are still eager to greet their customers and show us around the cafe, which is essentially set in the lower level of their home. We ordered the D’Arcangel breakfast of coffee with milk, fresh pineapple juice, scrambled eggs, ham, toast with butter and jam and a fruit salad for 5 CUCs. It was kind of astonishing that we got so much food for so little. It was delicious and we made it our business to go there for breakfast every day after. Don’t mind their cat, he is very friendly and if you’re seated in the back you will have the opportunity to see the families grandmother, who is often seen out back next to the kitchen, surveying all from a balcony. 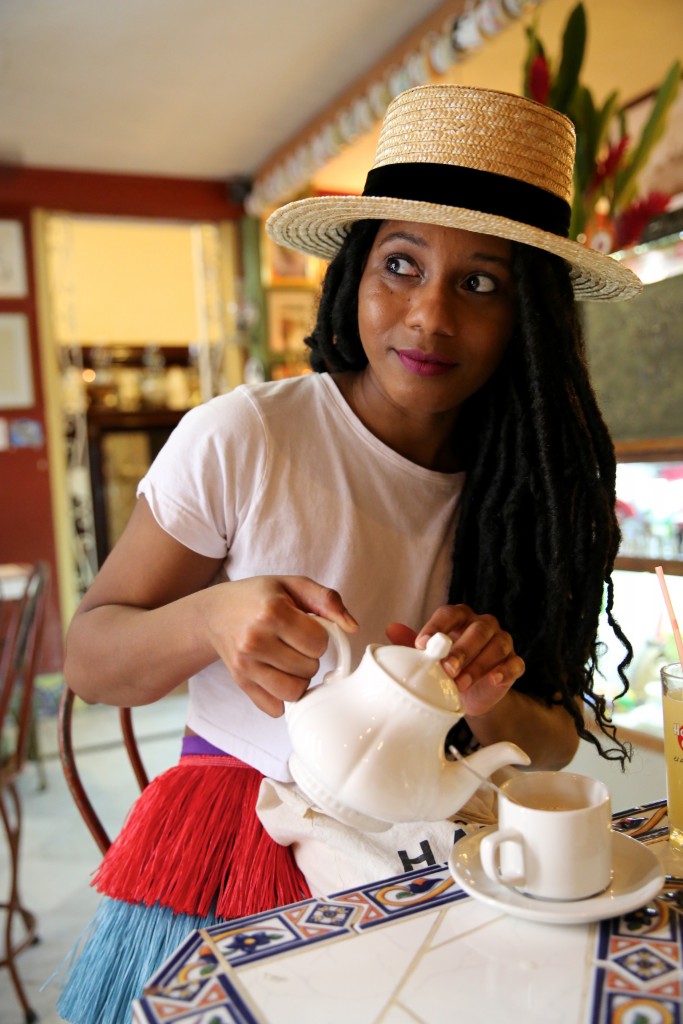 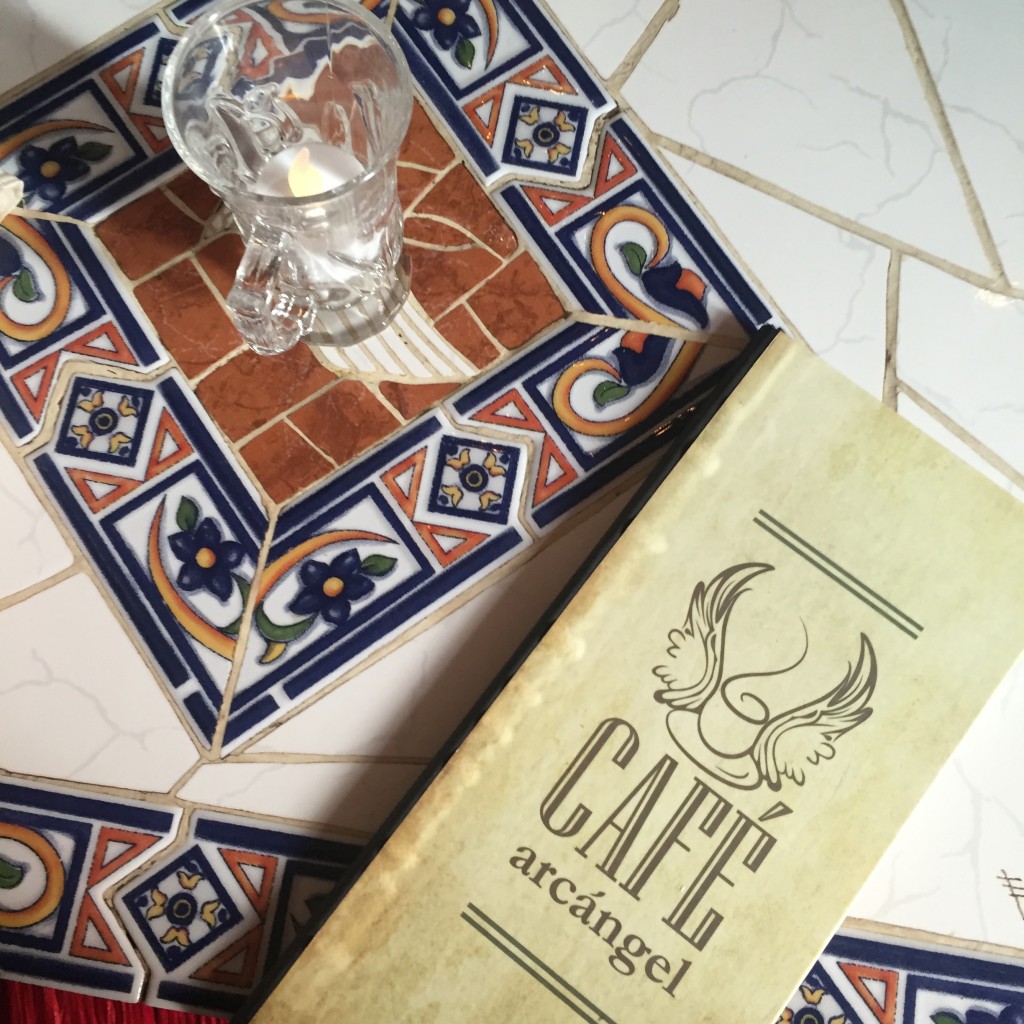 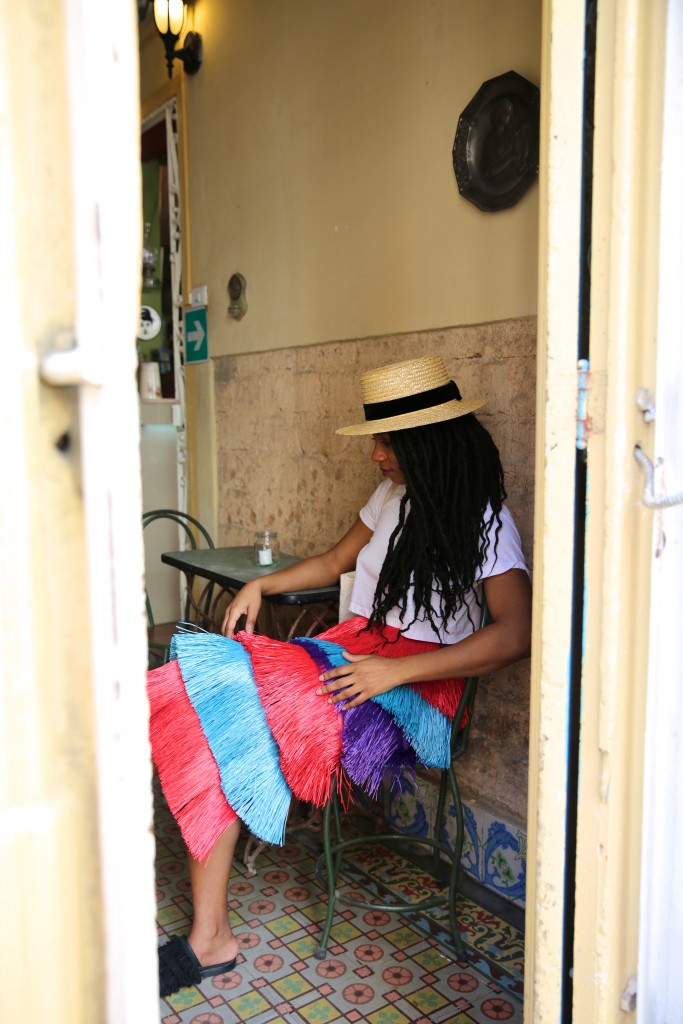 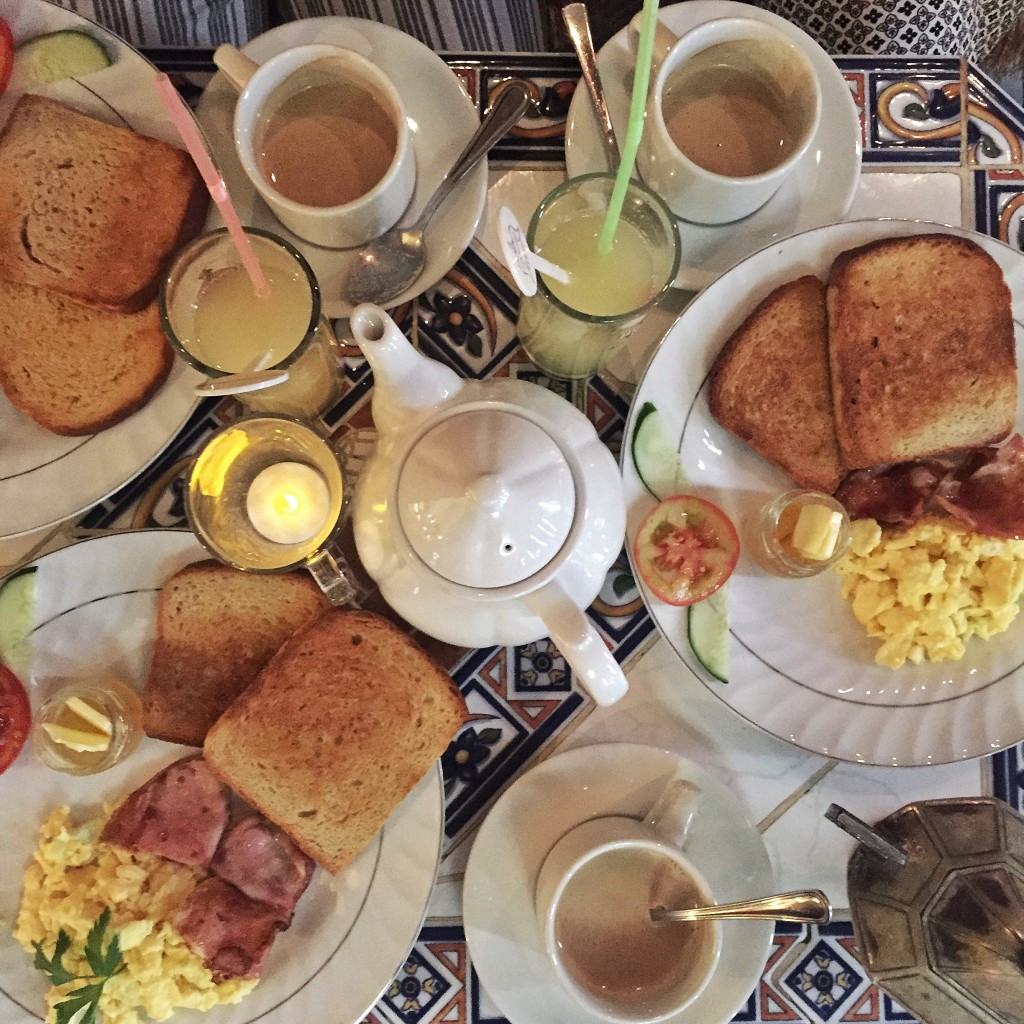 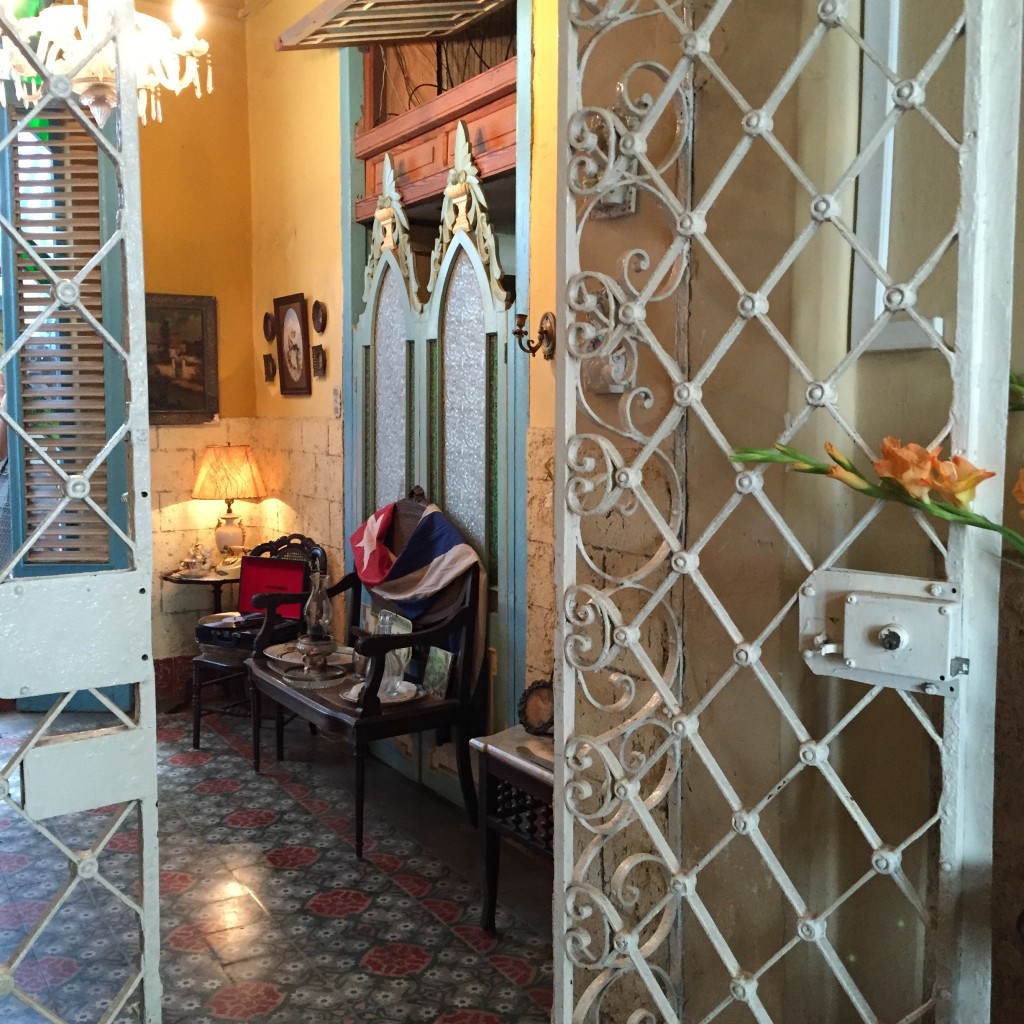 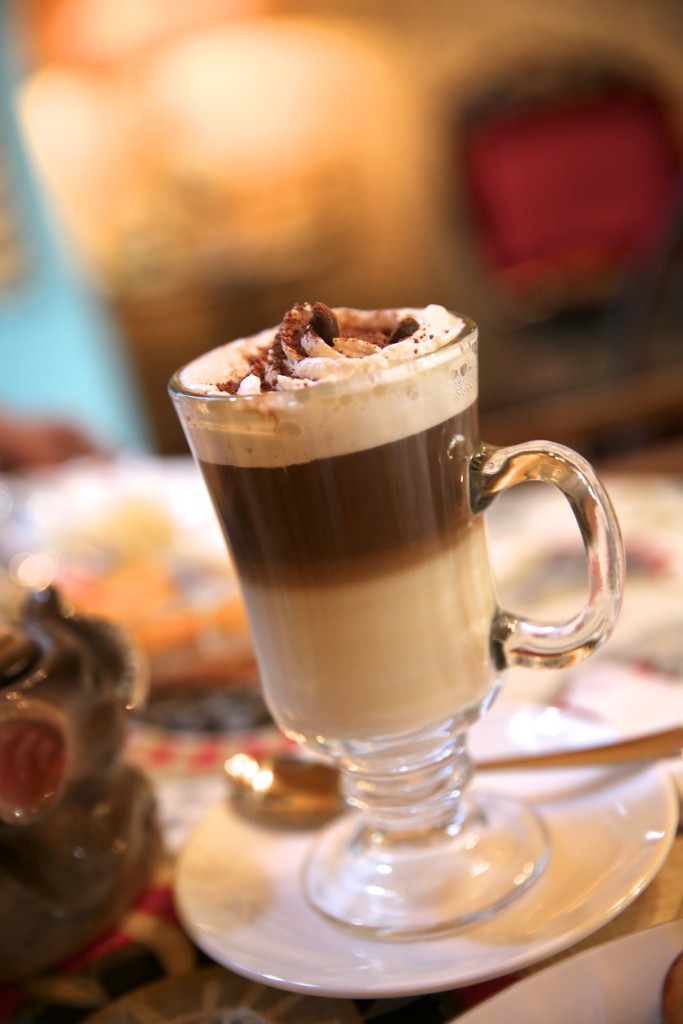 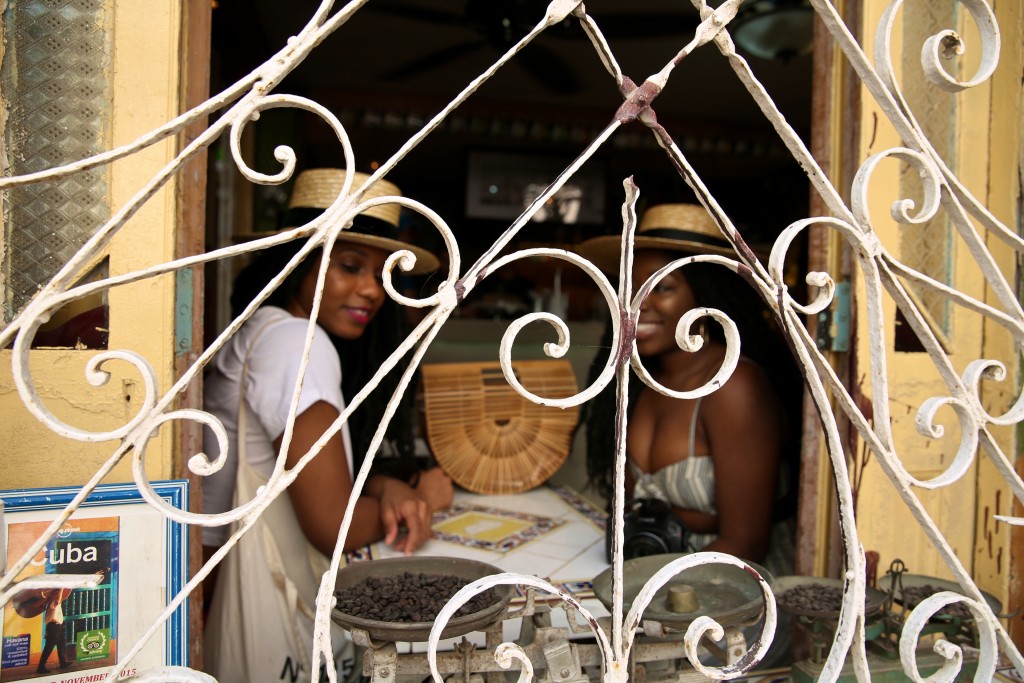 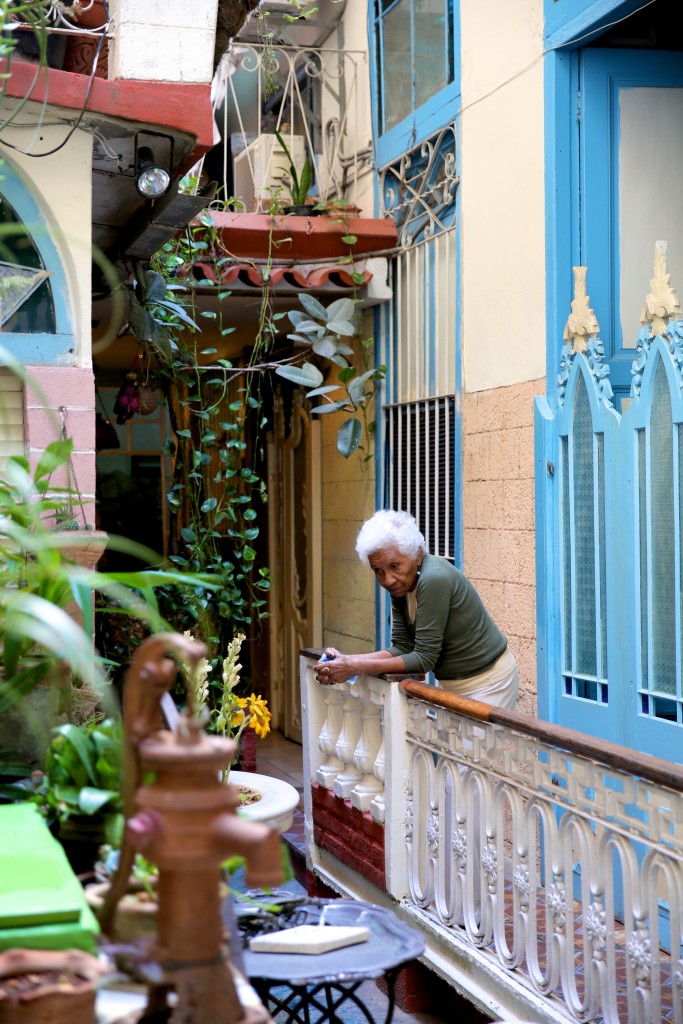 [aesop_content color=”#FFFFFF” background=”auto” columns=”2″ position=”none” imgrepeat=”no-repeat” floaterposition=”left” floaterdirection=”up”]While having breakfast another traveler from abroad told us about a place around the corner where we could go to take salsa lessons. It seems the best information just merely fell into our hands during this trip. So after a lovely breakfast we headed around the corner to Neptuno St to Casa del Tango and signed up for Salsa lessons for later that day. The cost was 15 CUCS per person and we each paid half upfront, the other half we’d pay at the end of our lesson. Then we hitched a ride in a classic vintage car to the Museum de Revolution for 5 CUCs (the smallest amount we’d paid during the trip for a cab). We were able to finally get out of our neighborhood and see more of Cuba. The area leading to the Museum is much more touristy with large hotels and groups of walking tours. The line was very long for the museum so we decided

to explore this area of Cuba instead, walking through the maze of colorful building that were a lot more in tact than in our neighborhood. This area is known as Habana Vieja and it was beautiful. We stumbled upon the art district where many artists were showing their paintings from their homes which doubled as their galleries. I was drawn into the home of Martalena. The artist was there sitting in a chair as I walked around her home admiring the 100’s of colorful and whimsical paintings she’d done. She often painted herself with short curly hair into the paintings. Langré noted that her paintings had a child like quality that lacked the attitude of perfection. I loved her work. We also checked out 2 other artists studios before heading to Bar La Floridita for much needed margaritas. 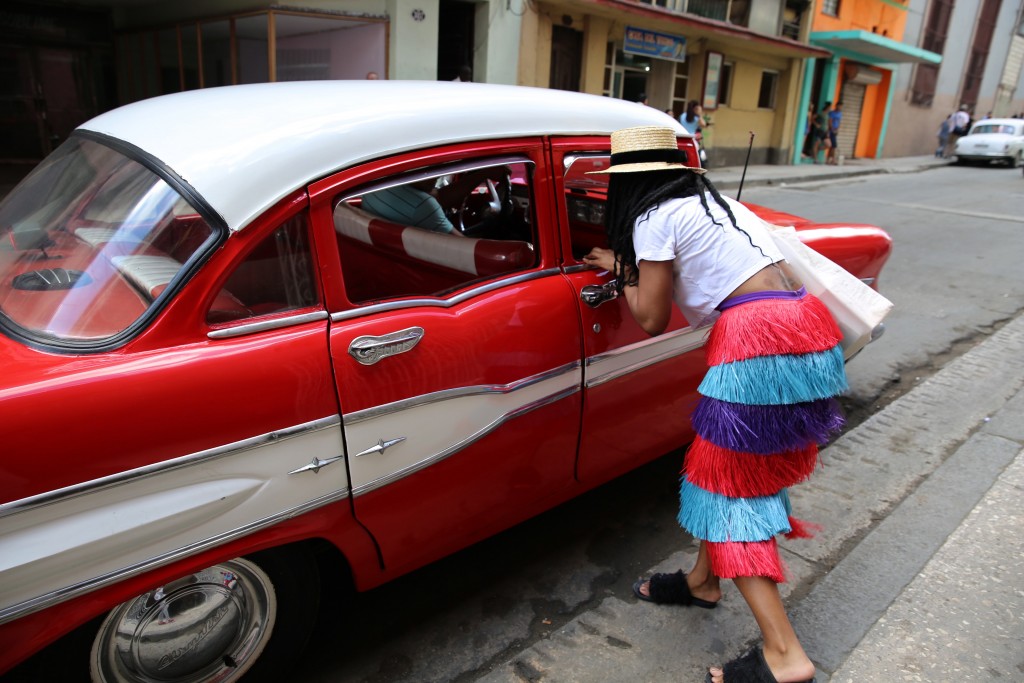 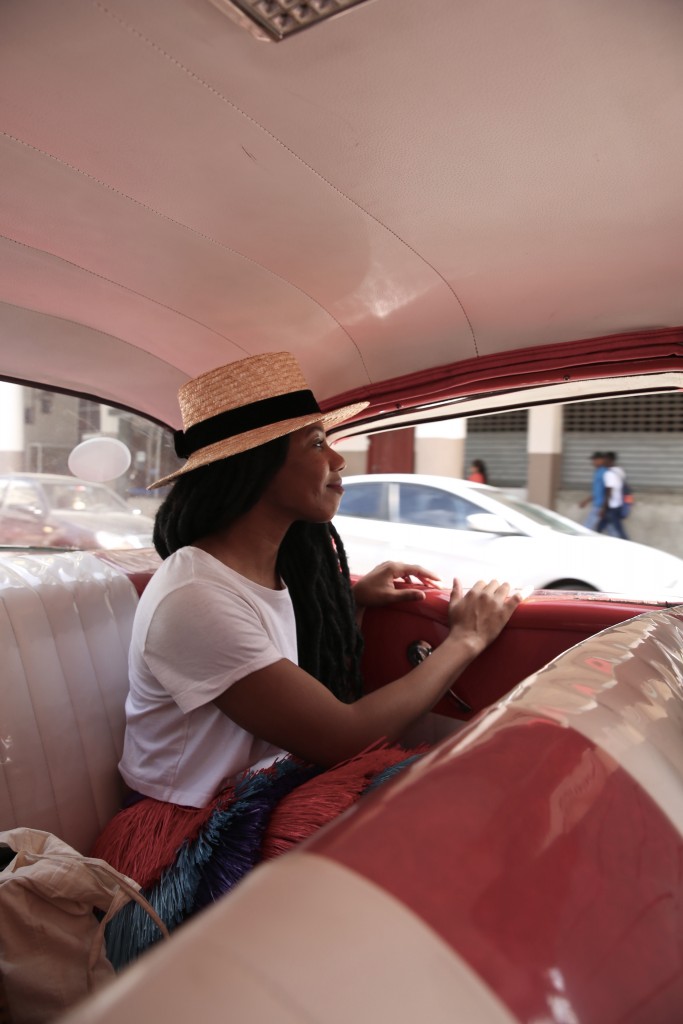 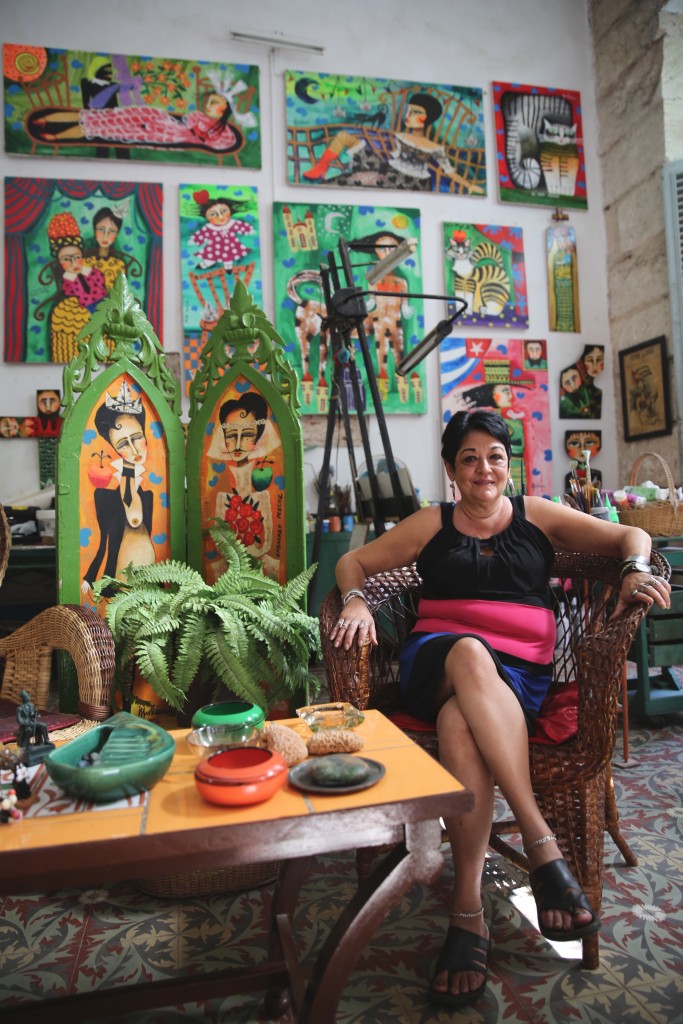 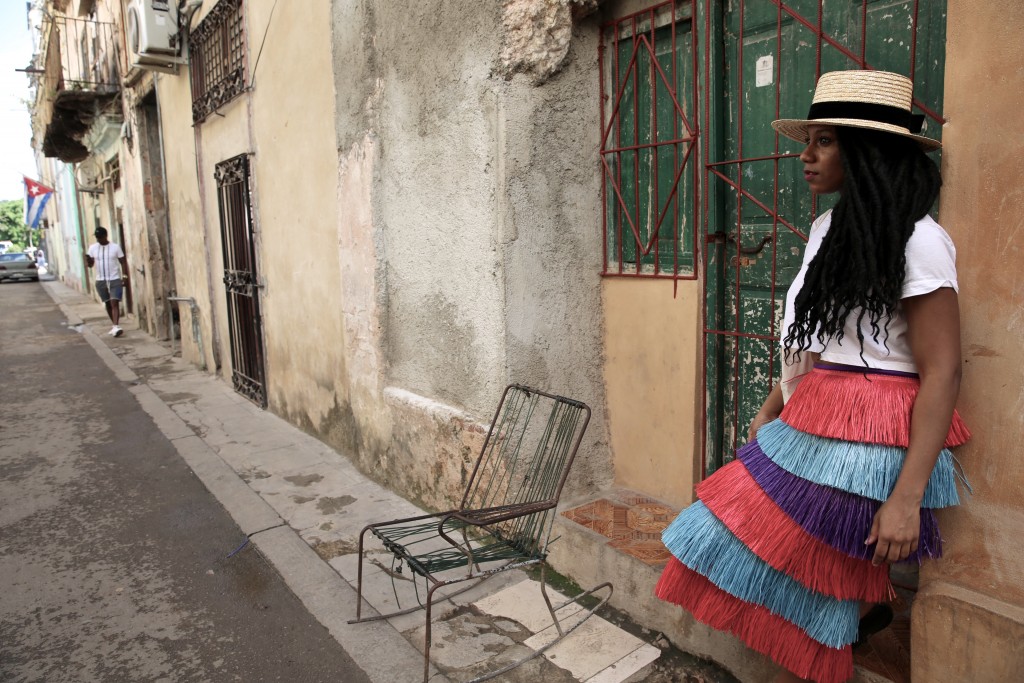 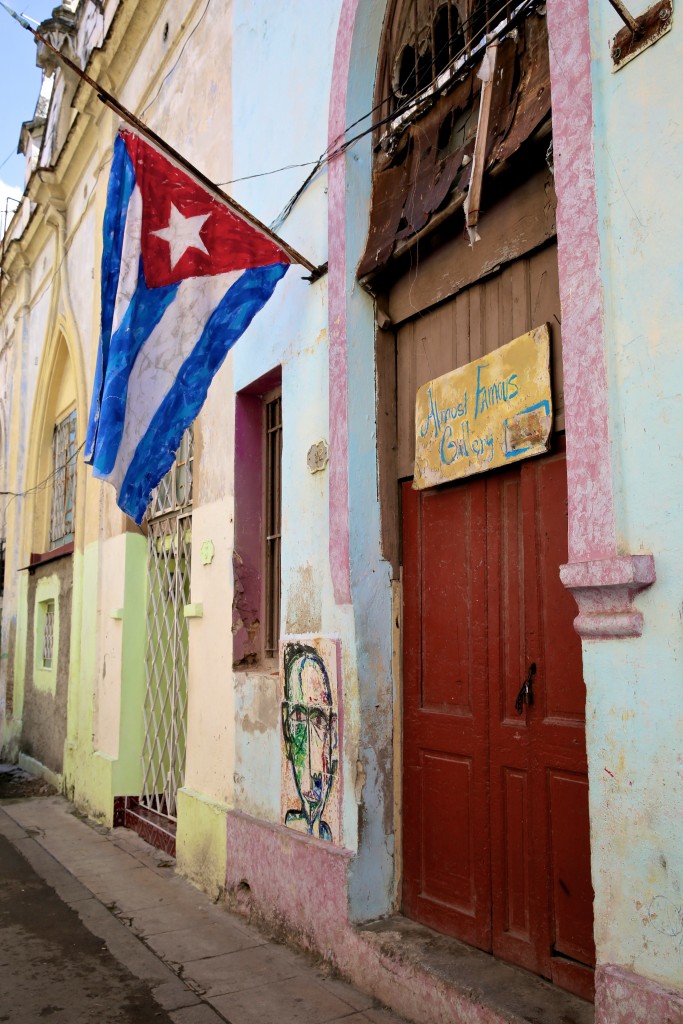 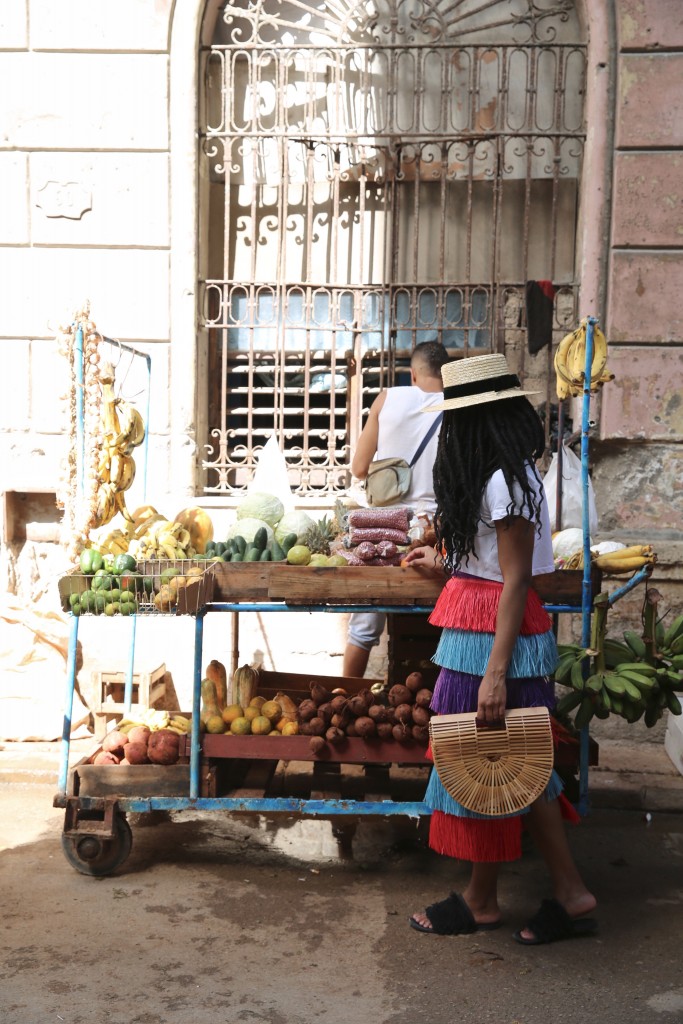 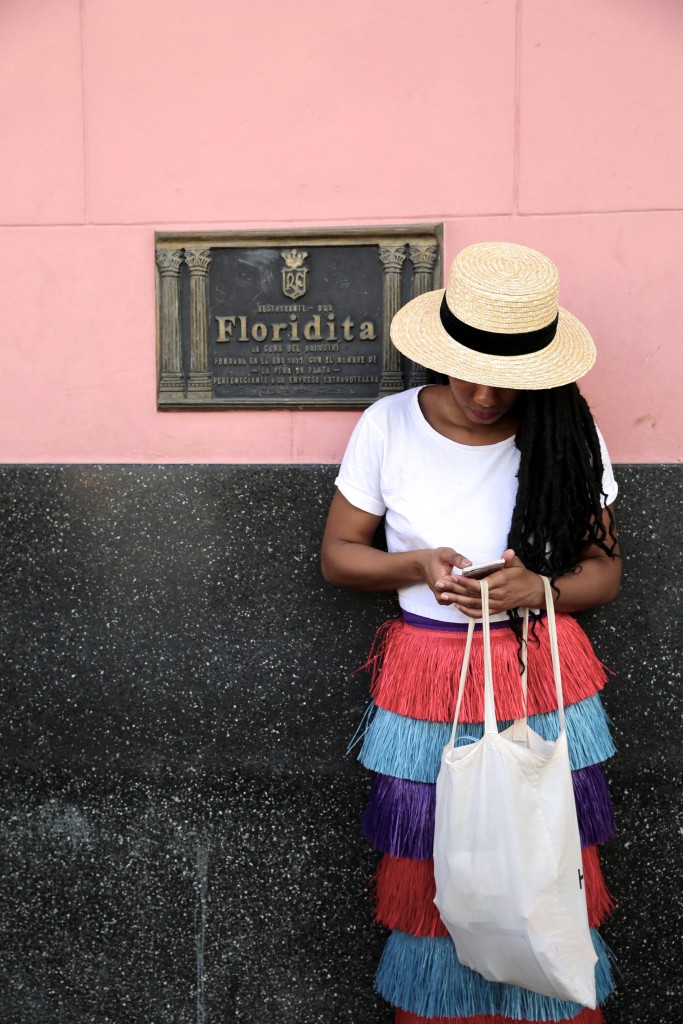 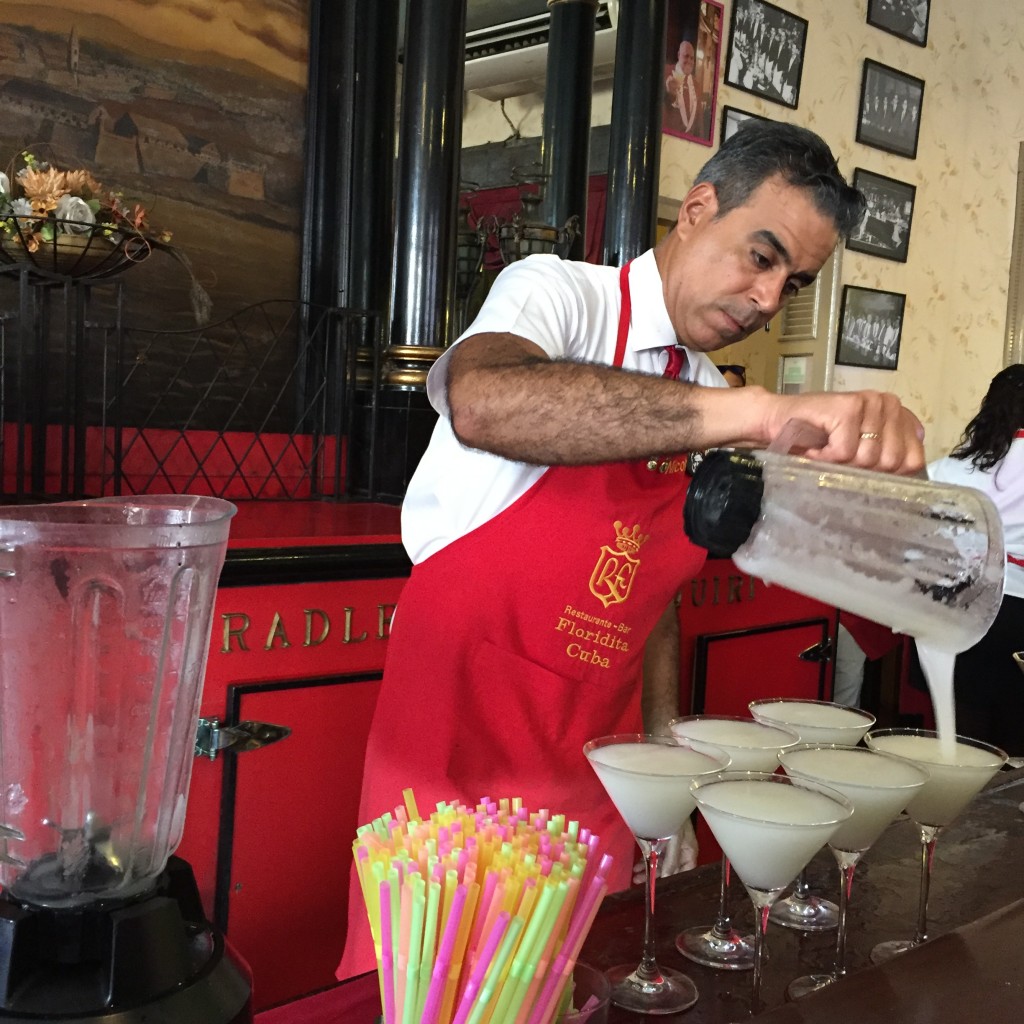 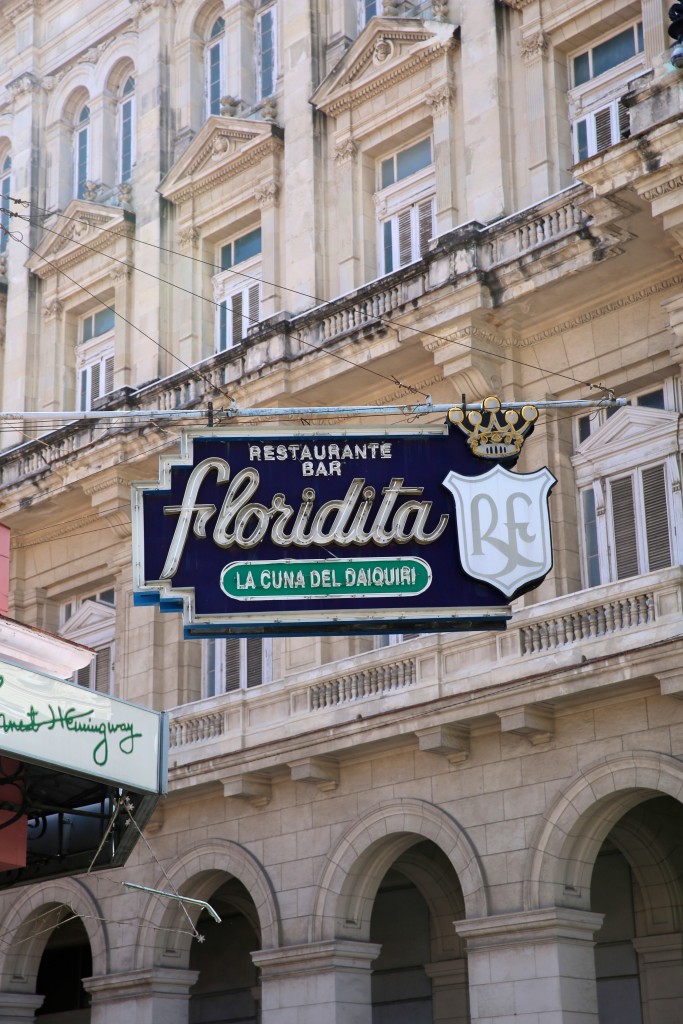 La Floridita is a popular destination for tourists because it’s where Ernest Hemingway used to hang out. In fact there is a statue of him in the corner. There was a crowded line to enter and a security person at the door made it a little simpler. Once we entered there was a band playing and a woman singing and people dancing. It was amazing. I felt like I was walking into the scene of a movie. We were welcomed and ushered in and lead directly to the bar where a master bartender whipped us up 3 frozen margarita’s. It was the best margarita I’ve had in a good while and the price was right for 6 CUCs. After paying our bill we headed out to the street to catch a pink vintage drop top car back to our Airbnb in Central Havana to rest a few hours before our Salsa lesson at 5pm. Yes, we were good and drunk well before 5! We rested awhile laying in our beds with the windows open and discussing Cuban politics while refreshing breezes cooled us. Then we got ready for our Salsa class and walked literally around the corner about 500ft to Casa Del Tango for our lesson. We each had our own teacher. I was with Yunaisy and my friends with Tito (the only male teacher at the time) and Yuna. We started with the basics learning the 7-8 core steps/moves of salsa. It was easy enough up until step 5-8. 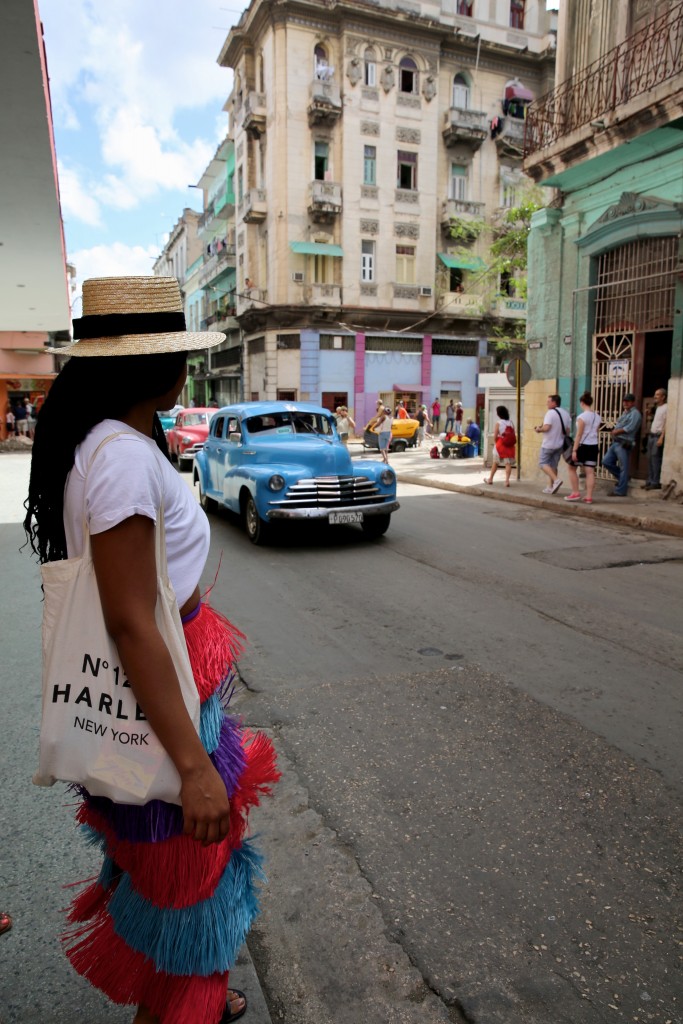 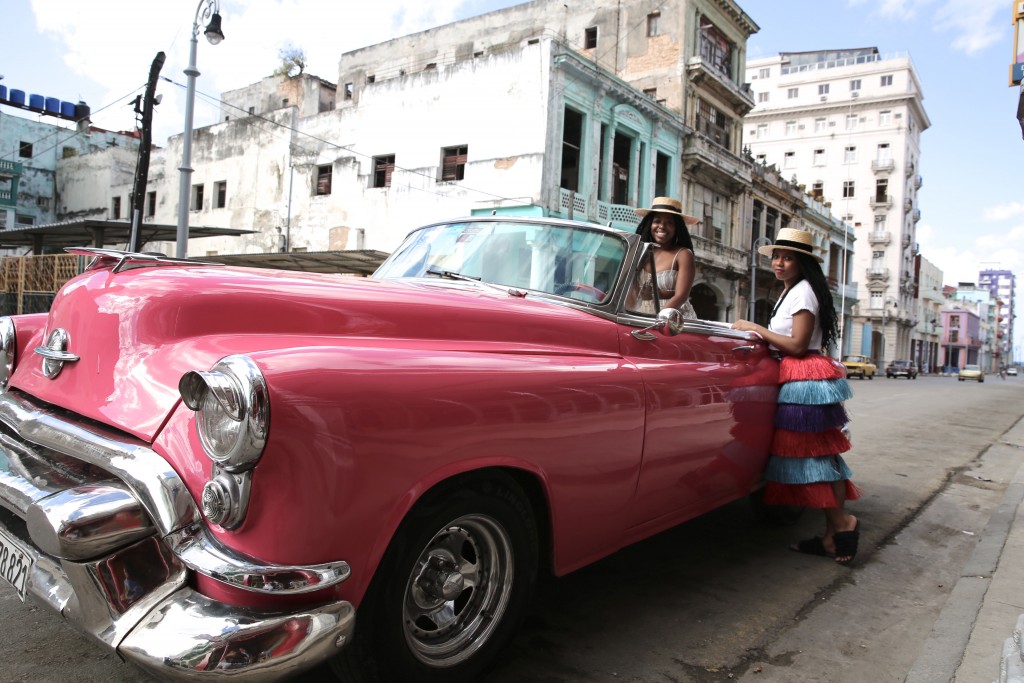 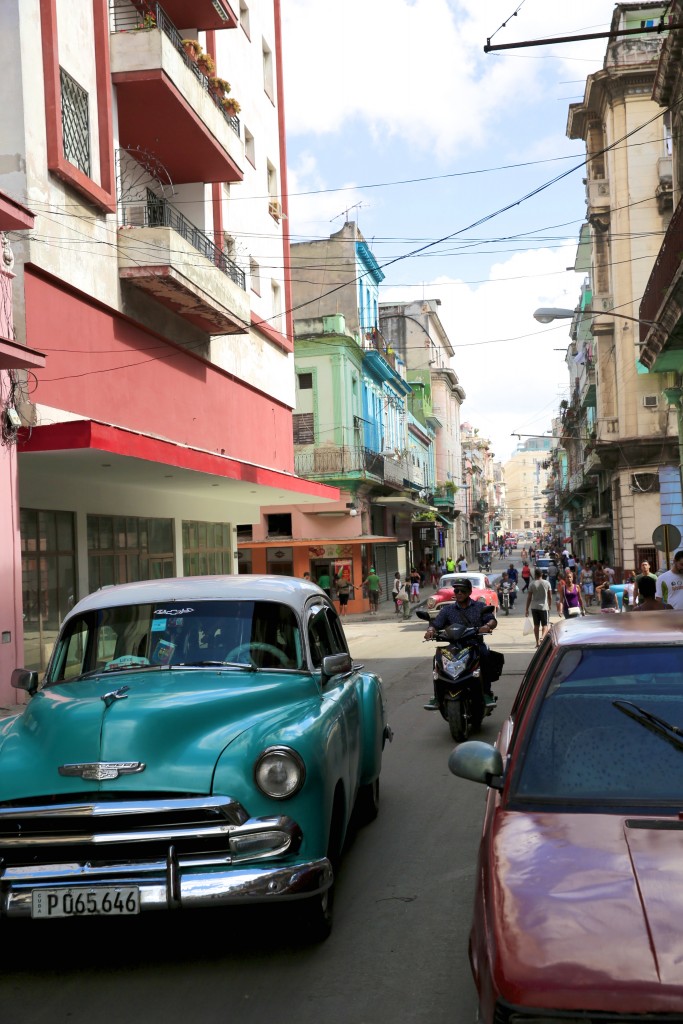 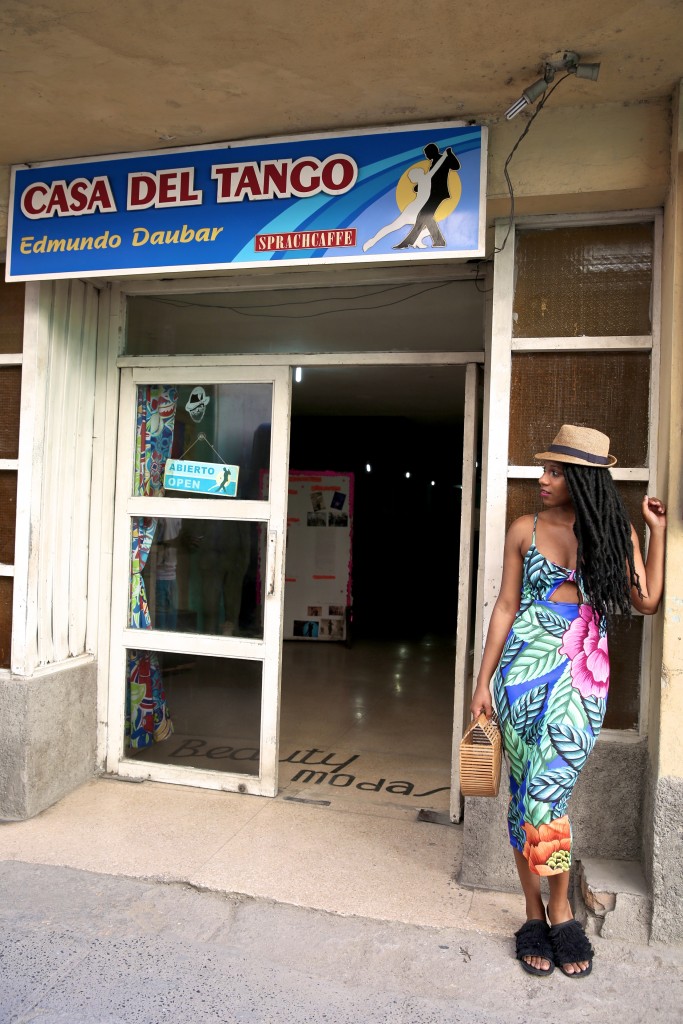 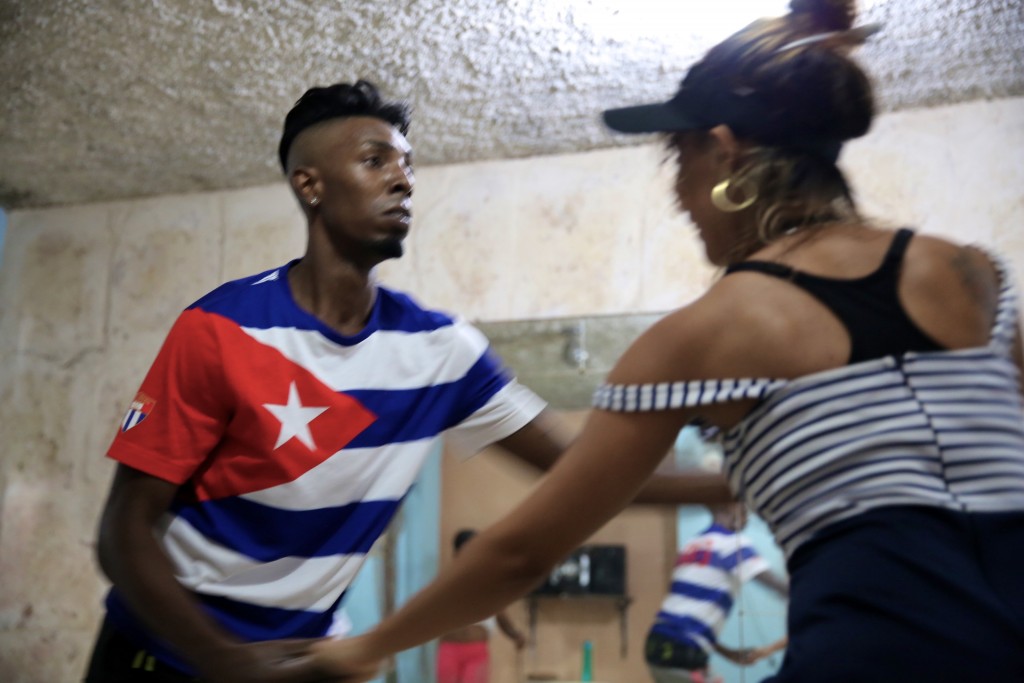 [aesop_content color=”#FFFFFF” background=”auto” columns=”2″ position=”none” imgrepeat=”no-repeat” floaterposition=”left” floaterdirection=”up”]That’s when I just couldn’t get it right. My teacher was a slender and about 3 inches shorter than me. I kept being told to let her lead. That she was the man and that I was merely a pawn along for the ride. Lol. This Salsa lesson was beginning to echo my resistance to being led in relationships. YIKES. I was told to relax a little. We danced and twirled and whirled. It was so much fun. For an hour and a half we danced and then we did a soul train line and free styled toward the end to 50 Cents Birthday Song. Hey, Cubans love American music but what they are able to obtain is usually a little dated. That didn’t stop me from Harlem Shaking though. By the end of the lesson we were all drenched in sweat and a little exhausted. So we headed back to our Airbnb to shower and rest. There was a great restaurant we were going to visit that evening that my host Rafael recommended named Doña Eutimia near Plaza de la Catedral on Callejón del Chorro Rd. We

hopped into a share a ride vintage cab which cost only 1 CUC because it has several people to drop off. It’s kind of like Uber pool but you just hail the cab on the street. We dropped the first passenger off and then we were off to the restaurant. The driver spoke a little english and was eager to show us all the sites along our drive. At the time we didn’t know that this ride was only 1 CUC so when we arrived we asked how much, assuming it’d be the usual 10-15 CUCs but the driver just waved and said its free. We were all in awe. So we gave him 10 CUCs and were on our way. It was very kind of him to not want anything but we felt obliged considering most people in Cuba only make about 20-30 CUCs a month. That goes for lawyers, doctors and engineers. The people who make the most are those in service industries like taxi drivers, people who rent out rooms and restaurant owners. These people can make upwards to 1000 CUCs a month. 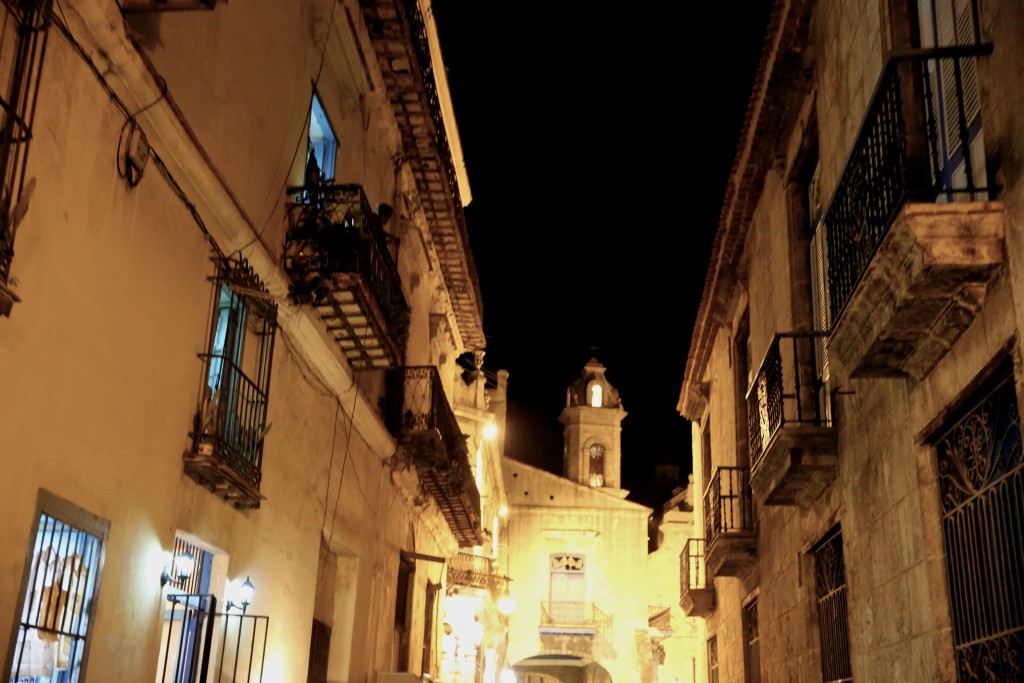 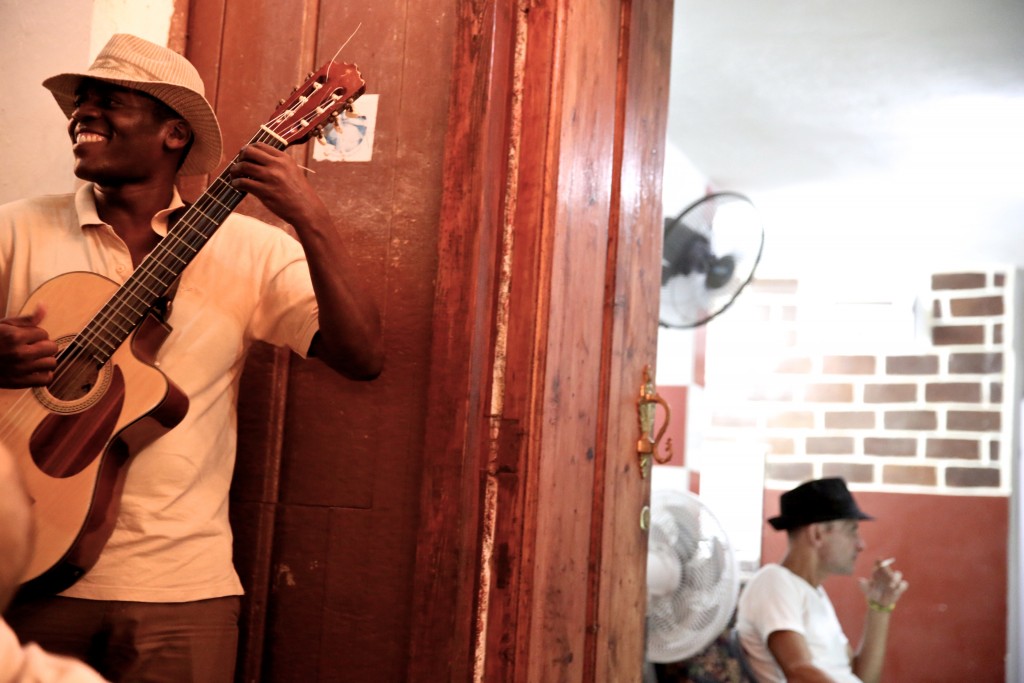 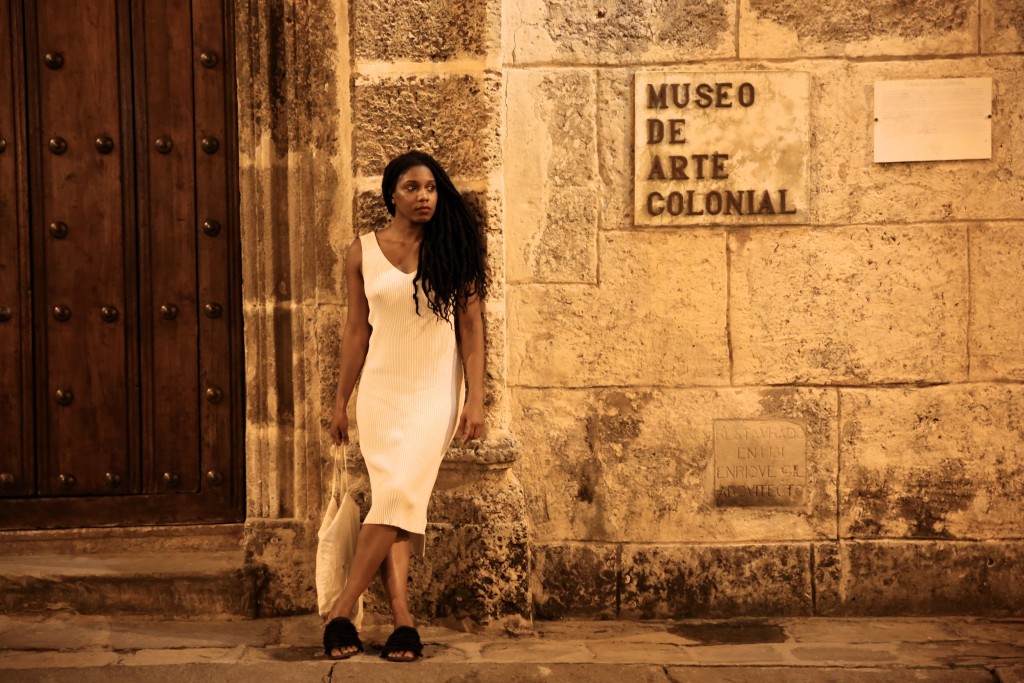 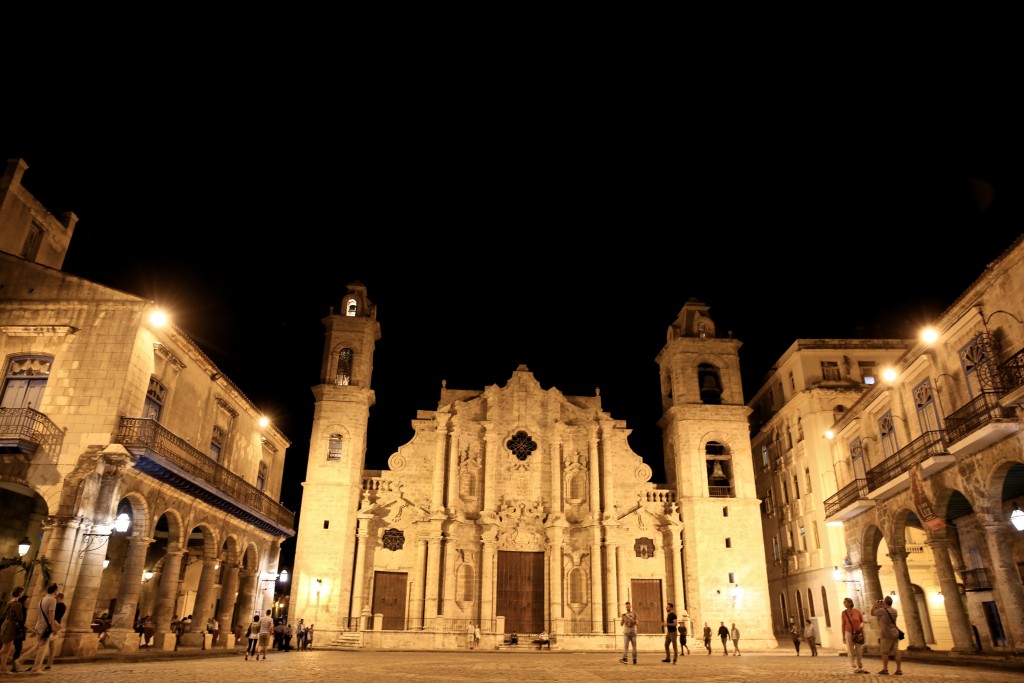 Make sure to download Maps.me app and get a map of Havana Cuba. It works without internet service and you’ll never get lost and always have a way to show drivers where you want to go. This is what we had to do to get to Doña Eutimia. The area around the Plaza de la Catedral is beautiful with large buildings including the Museum de Arte Colonial as well as the Cathedral. San Ignasio street is chalk full of restaurants with live bands and Doña Eitimia is at the end of a dead end street also full of restaurants filled with nothing but tourist. There is a real ambiance in this area though that shouldn’t be missed especially when it comes to the architecture. When we arrived the place was packed and we didn’t have a reservation. Apparently, the restaurant was totally booked for the rest of the night so we ended up eating at a spot right next door with outdoor seating. There was a two maned band playing guitar and singing who added a wonderful soundtrack for our meal. I got the fish and it was delicious. We also got some friend green plantains which were perfection and we were practically fighting over who got to eat the last one. After eating we waited a good while after paying our bill waiting for change. Change is scarce in Cuba. Getting anything less than 20 CUCs is hard as hell. 5 CUC bills are hard to come by and anything smaller than that (3 CUC bills and dollar coins) are practically unicorns. We were due 4 CUCs change and really needed the smaller bills. But they never came. Finally we gave up and left and immediately after we stood up and walked off the waitress emerged from the inside the restaurant to clean our table. Don’t expect to receive your change if it’s less than 5 CUCs. 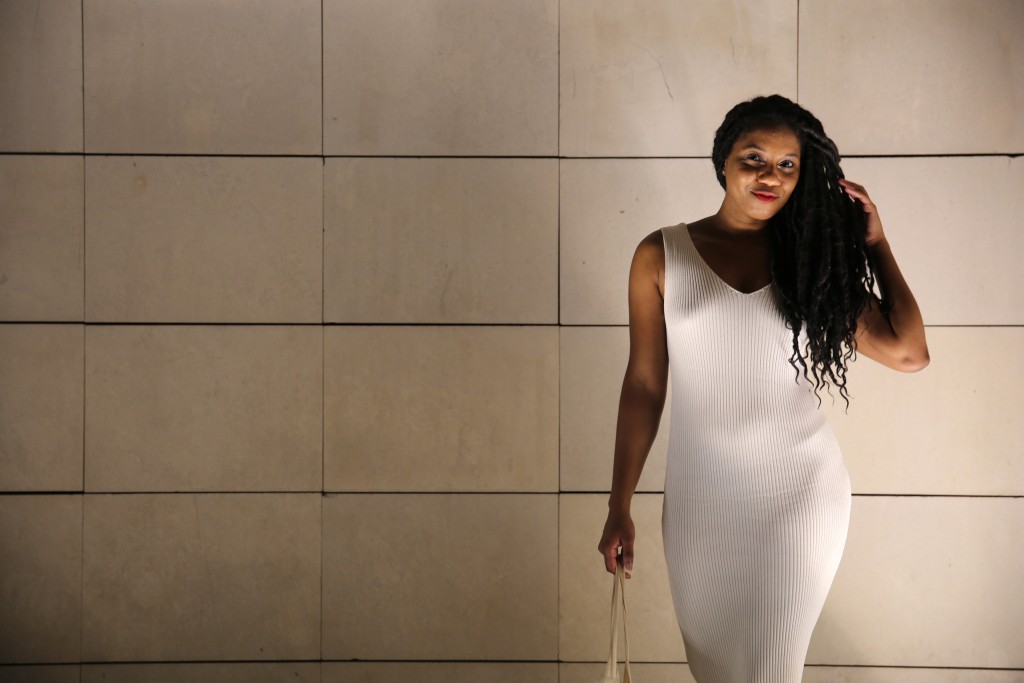 [aesop_content color=”#FFFFFF” background=”auto” columns=”2″ position=”none” imgrepeat=”no-repeat” floaterposition=”left” floaterdirection=”up”]We decided to walk around a bit checking out the Cathedral and Museum that was all lit up against the darkness of night before catching a cab home. This time we got in a plain car with a young male driver (Sidenote– you won’t see many women if any at all driving). He was playing American music, a cover of Rihanna’s Stay. He wanted to know who sung that song and we filled him in. He was so happy and grateful to finally know who sung this song that he was so in love with. He told us that he was an engineer but that there is no money in being an engineer so he started driving to make more money. He dreams of getting out of Cuba and visiting America but says it’s simply to hard to get a passport and leave Cuba. He’d already been denied a few times. This was a running story we heard from many Cubans. They want so badly to travel but it’s very expensive and

even if they have the money they can be denied a passport for any reason or no reason at all. The fees for a passport and tickets to fly would cost the average Cuban 5-10 months salary. Most of the Cubans we encountered were eager to talk about America. They all LOVE Obama and they all are pretty scared about what changes will be made between Cuba and America now that Trump is President. (They dislike Trump very much, we all relate on that level). We reached our destination and each crawled into our beds. Happy that we have freedom of speech and choices. The choice to be whatever we want to be and go wherever we want to go. I’d never been so grateful to be an American even with all the hell happening here since Trump took office. People are still willing to die on a raft and risks their lives to get here. That’s something.