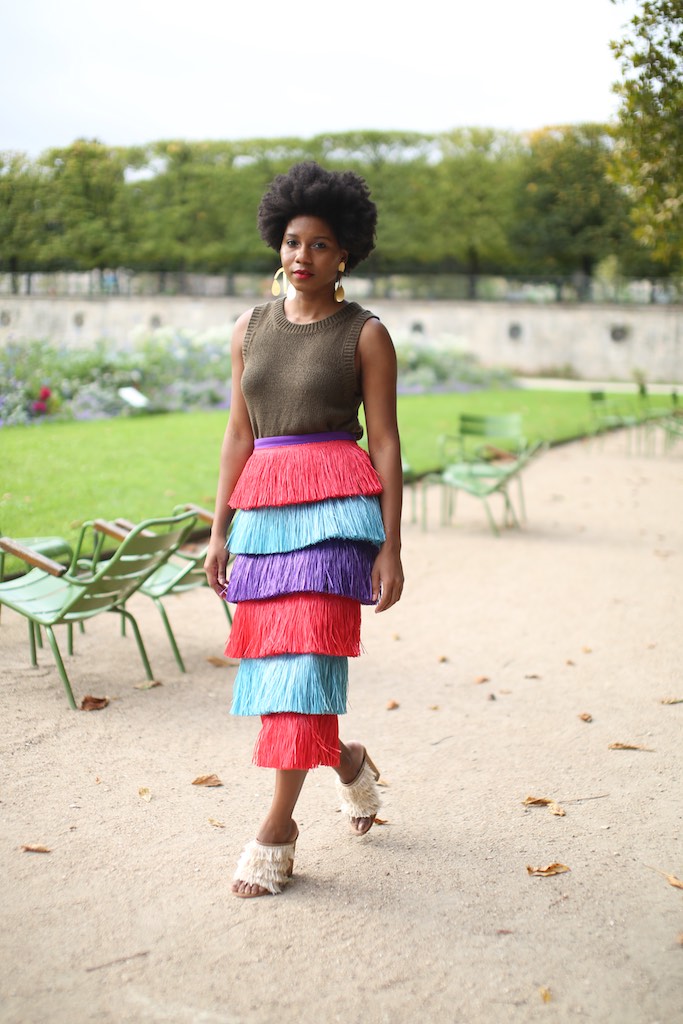 Friday, I had a quite emotional experience at the Issey Miyaki SS 2017 Fashion Show. Issey Miyake is always a fun show and not only that it’s a production. There is always live interesting and entertaining music and this show was no different. The venue was further from the Paris city center and was a 20 minute Uber drive to Rue de Bercy. I decided to go with Uber pool because the last few days I have been racking up a pretty extensive Uber tab. On the way we picked up another blogger Amy Ramirez from Spain and we bonded over our love for Paris. Of course when I told her I was from New York, her eyes got wide and she repeated it, New York with a lovely Spanish accent. Then it began, the conversation of who is better, Paris or New York. I’ll tell you this is a running conversation with any foreigner I’ve ever met in Paris. It’s always nice to hear so many people love New York just as much as I do, but HELLO, Paris is divine. But back to the show, Issey Miyaki always brings out the top tier fashionista’s during PFW so I wasn’t fucking around when it came to my look for the day. I packed my Stella Jean skirt specifically for this occasion. 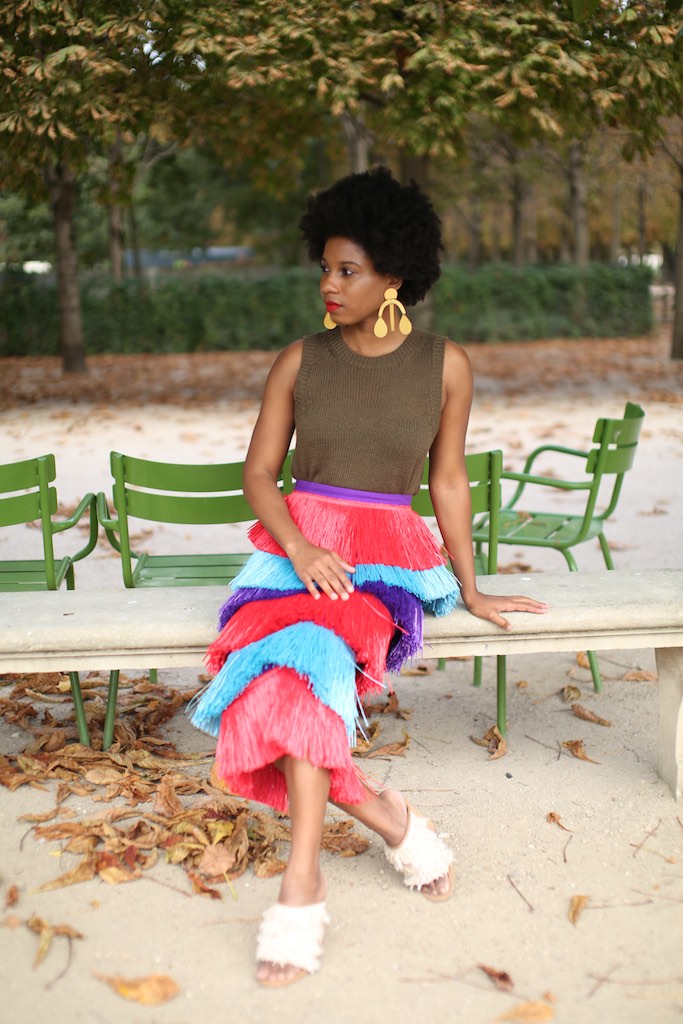 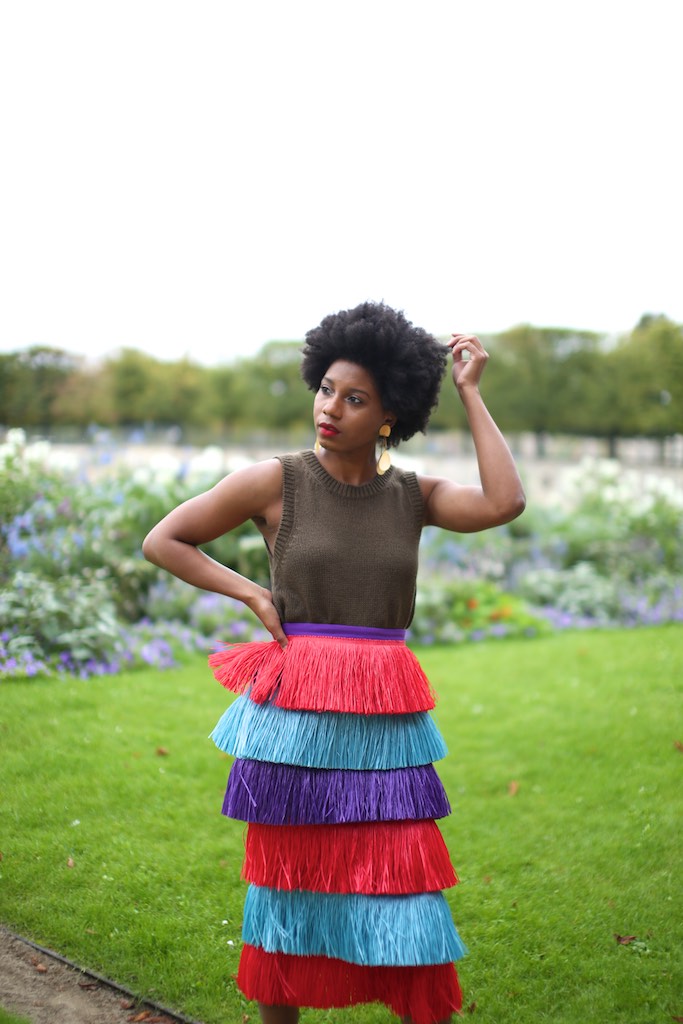 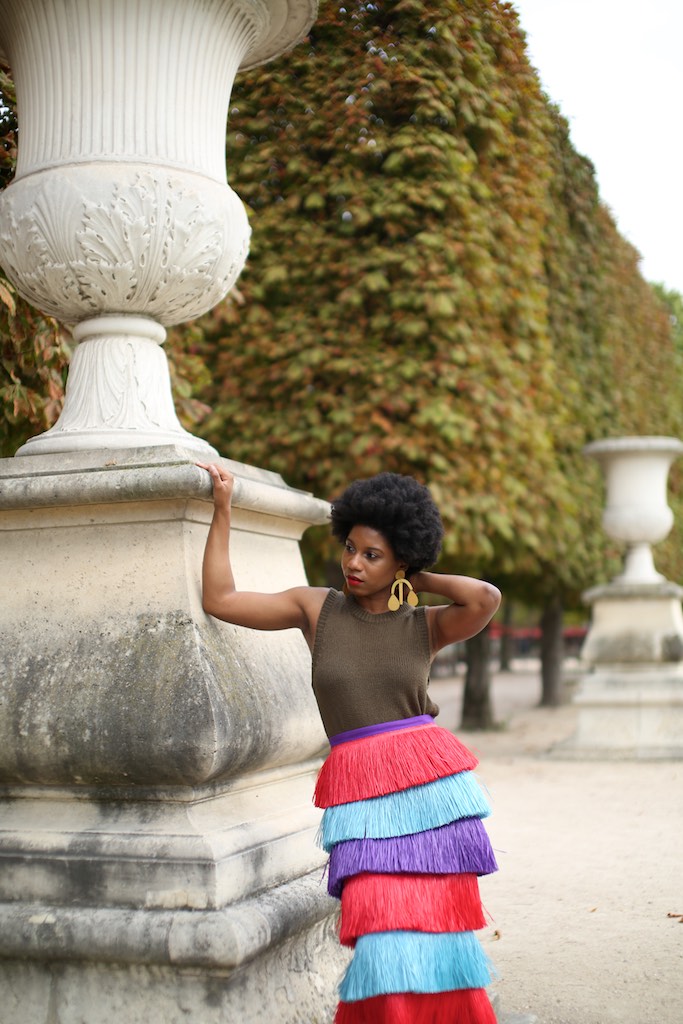 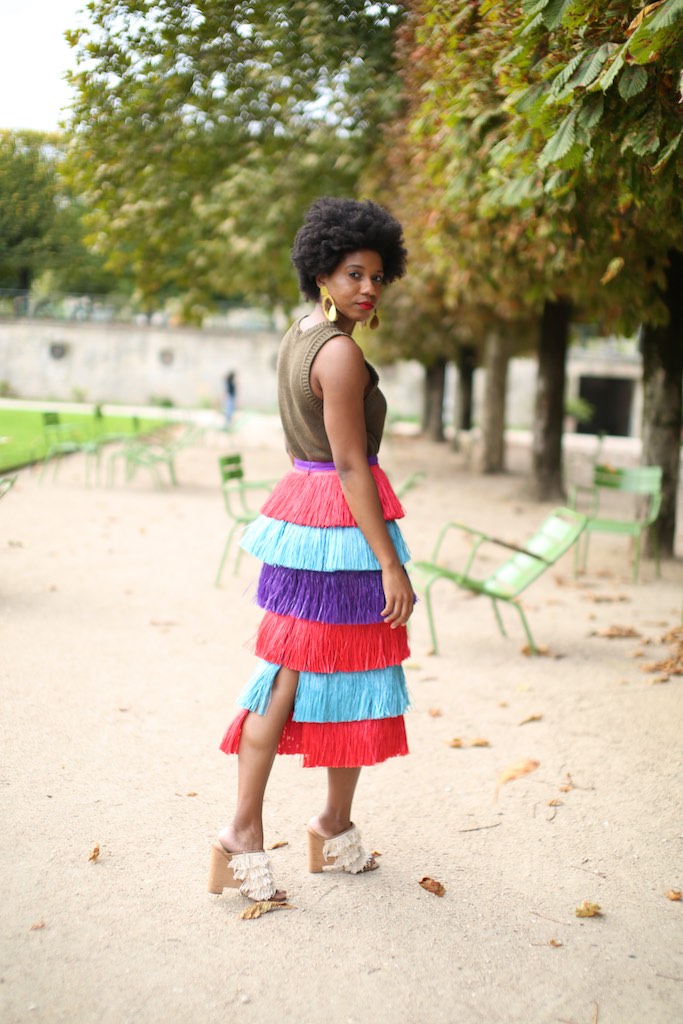 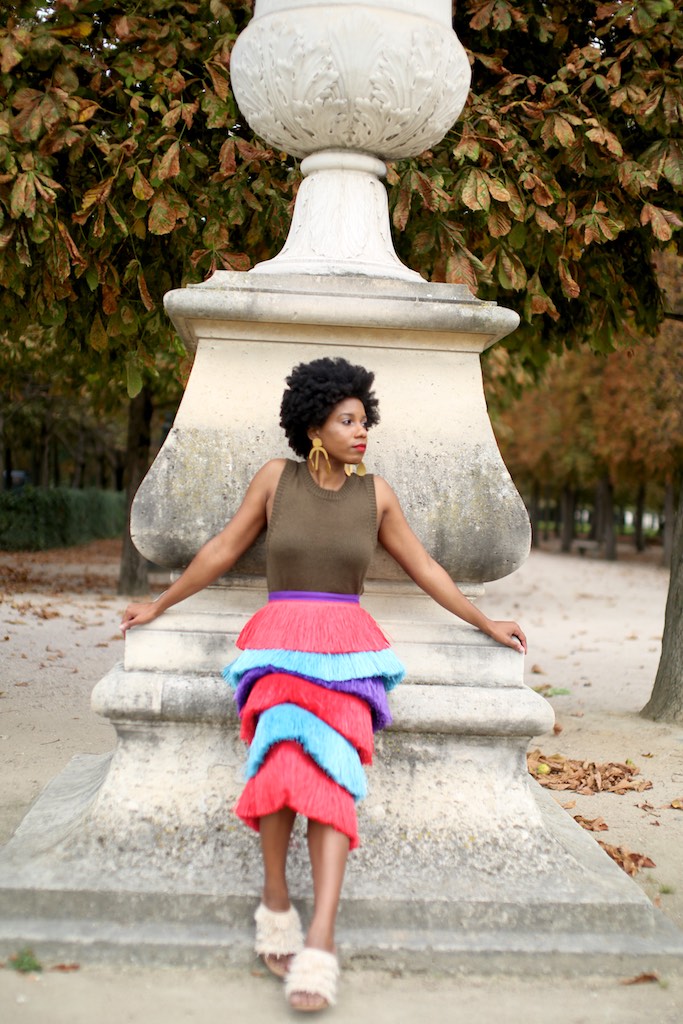 [aesop_content color=”#FFFFFF” background=”auto” columns=”2″ position=”none” imgrepeat=”no-repeat” floaterposition=”left” floaterdirection=”up”]I arrived to find Krystin and Trisha already in the courtyard of Place de Bercy, surrounded by photographers. It was a pretty awesome sight. I don’t mean to sound, well egocentric but I actually really love the sound the really fast shutters make when photographers are in the zone and snapping away. I am also horrible at posing for and taking photos in front of a lot of people. I may seem very outgoing but I feel very weird and awkward at moments like these. That’s why I really love when photographers give you direction, i.e., “Smile Madame’’ or “Look to your left more”. Which is why I also really fell in love with my Paris photographer Tatiana.

I found her on Instagram by checking out the #parisphotographer hashtag and all the photos that I really loved were all Tatiana. She is so bubbly and fun and open I had a blast shooting with her 3 out of the 6 days I was in Paris. She also gave great direction and was super creative. I felt like we made some magic together in Paris and I would highly recommend her. All this to say, I had my photograph taken a lot Friday. What can I say, it’s C’est JUPE! (THE SKIRT!). I heard it so many times, I’ve come to know that Jupe means skirt. It is a fabulous piece. I still need to go check out Stella Jean’s latest collection and perhaps put my bid in for something quickly on Moda Operandi. 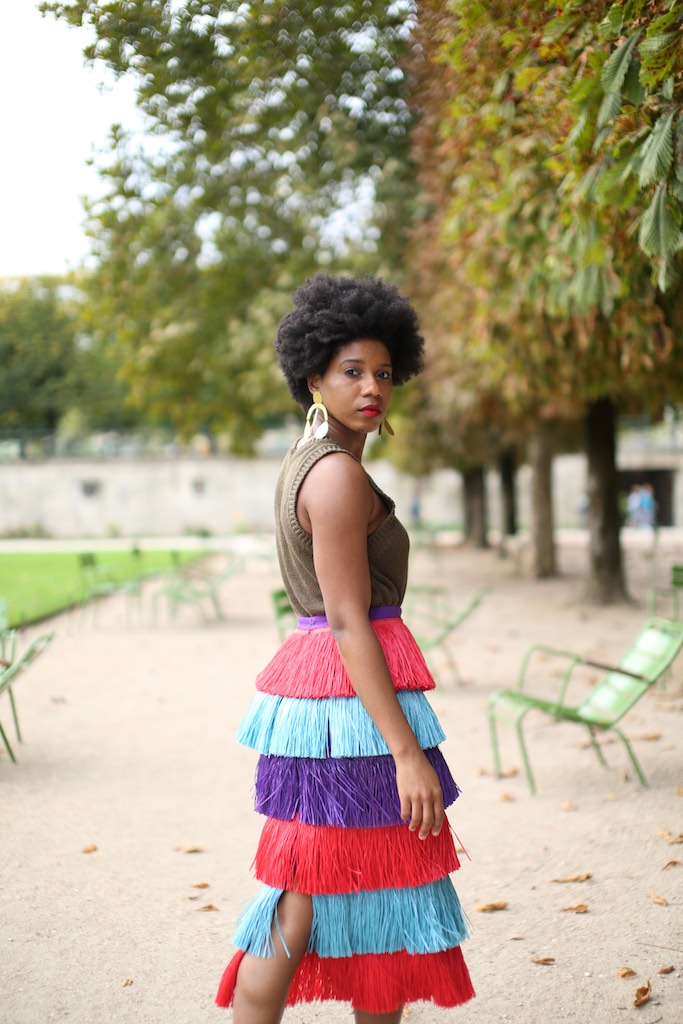 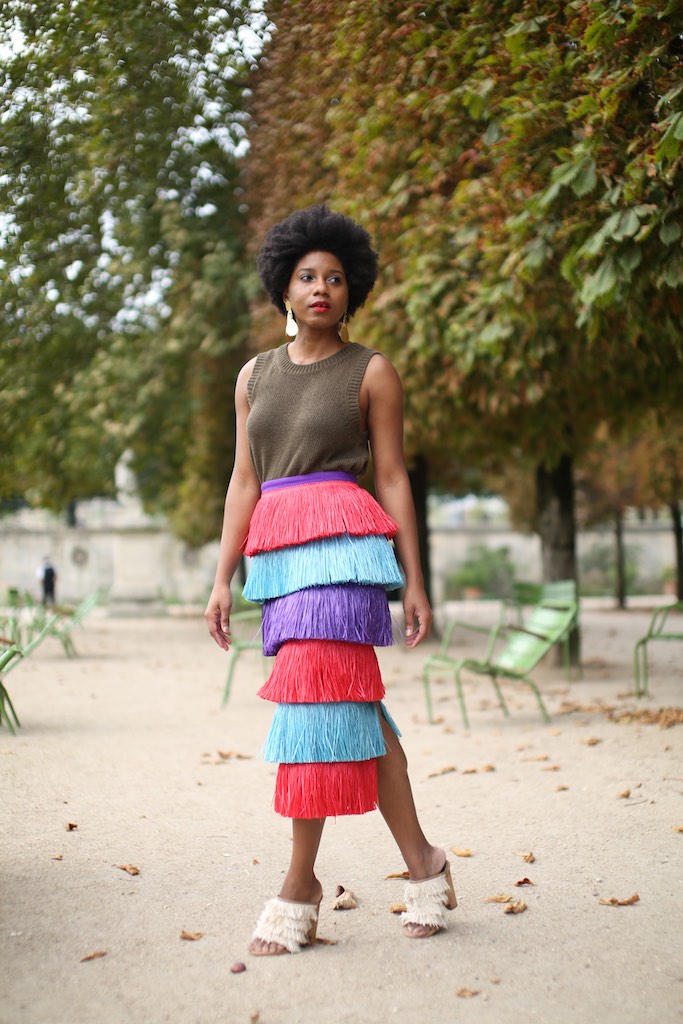 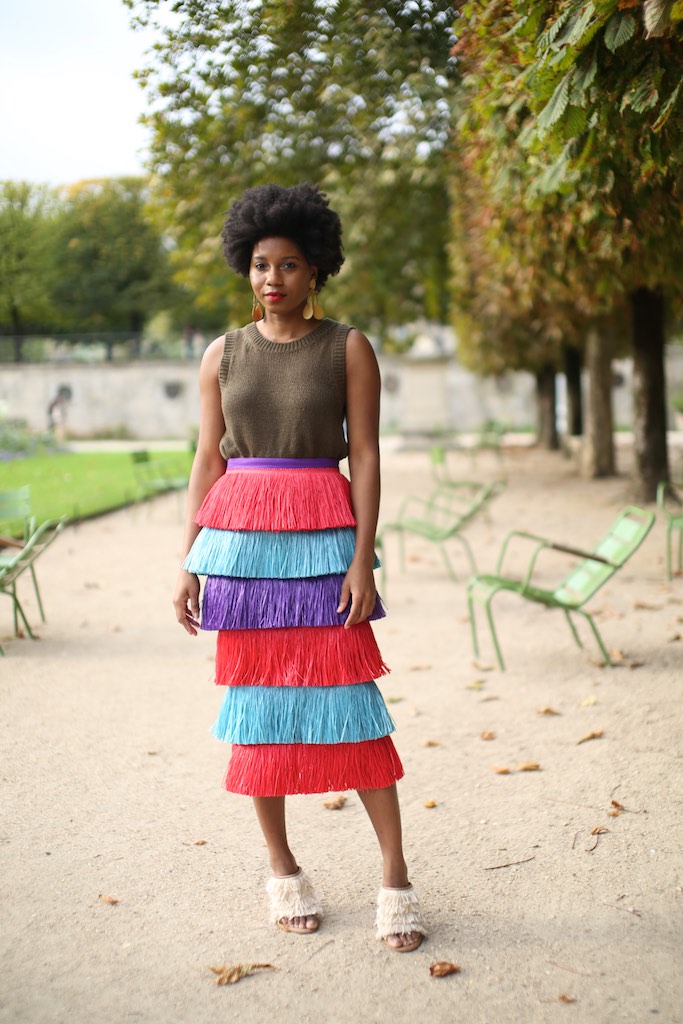 Stepping into the venue of the Issey Miyaki SS 2017 show was like stepping into some place of the future. It was concrete and stark yet had white mounds of different shapes and sizes, sprinkled throughout the space. The seats were arranged in an arena type setting with the stage at the front and empty space in the middle and seats surrounding the space. Of course at the bend of the U shape was the photography pit and they were stacked on each other every which way. Each trying to secure a perfect spot to get the perfect photos of the perfect models. The 4 musicians stepped onto the stage and the music began, at first softly then thumping and pounding with base you can feel in your bones. There was a single spot light and out came the first model to step into it. That spotlight then turning into a runway of light and the show officially began. Issey always has great silhouettes, styling, music and prints but what really blew me away, the models. More specifically, all the black models who walked in this show. I’m pretty sure at one point I counted 5 all on the runway at the same time.

I also noted that all of the models who weren’t black had their hair done in an asian inspired blunt ponytail with added hair. I love the fact that this was not attempted on the black models. They were all there with afros, teeny weeny afro’s, kinks and curls. I couldn’t believe it. I swear watching these women walk the runway made me tear up. I was just so proud and happy. Especially after all the backlash Marc Jacobs received from his response to using dreads in his New York Fashion Week show. Here was a designer or at least visual stylist and hair that didn’t feel it was necessary to put that pony tail on a black model and allowed them to rock their natural look down the runway. It was really eye opening and I hope more designers take note of how Issey Miyake is changing the game.