You all know my intense love for shoes. If you don’t check out this video of my favorite shoes, and this story about the lengths I went to for a pair of Charles Jourdan pumps. Then there are these L.A.M.B. Morisa’s that are now my new favorites. Thus…I am super excited to share this indepth interview with the shoe designer behind Charles Jourdan and L.A.M.B. 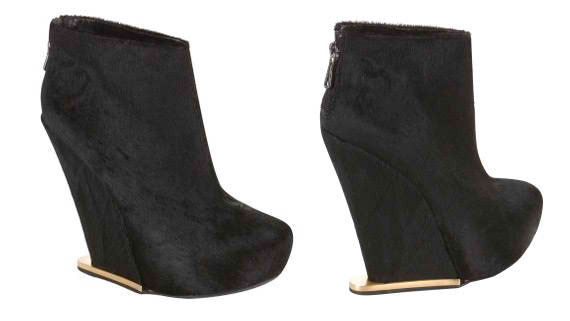 FSNYC: How many pairs of shoes do you own?
EB: Oh Man. [Laughs]. I honestly don’t know. I have a storage unit. It’s less than 1000 for sure. I have a storage unit in Brooklyn that holds most of my shoes and then at home I have a full closet just for shoes. A lot of shoe designers buy shoes that they don’t wear. It’s part of being a designer to just collect. It’s kind of like an archive.
FSNYC: For others aspiring to get into shoe design or just designing what advice would you give?
EB: One of the biggest things that you have to be willing to do is hustle. Nothing is going to come to you unless you already have the money or connections right off the bat. You have to pay your dues. If you have to start at the bottom with the low paying job, take it learn from it and move on. Don’t be afraid to switch things up. Some people will stay at a company for five or six years when really you should just learn the skills you need and move on. That’s the best way to get into design. As far as starting off you have to be humble and hustle and willing to take the jobs that aren’t the best and pay that isn’t great. As far as education there are several amazing schools that can prepare you. I would suggest getting an internship while in school in the field of design you want to be in. The main thing that’s really great today that I didn’t have growing up is the internet. These blogs are amazing. Start a blog. Constantly be out there searching the market and make yourself aware of what’s going on in fashion.
With that we were finished. Elizabeth had another meeting and took the rest of her pizza to go. We walked outside and it had finally stopped raining and the sun was shining a bit. We hugged and she told me to enjoy my shoes! Oh…I will…I definitely will.
Google Friend * Facebook * Twitter * Tumblr * Bloglovin’* YouTube *Lookbook.nu
Follow me on INSTAGRAM @monroesteele