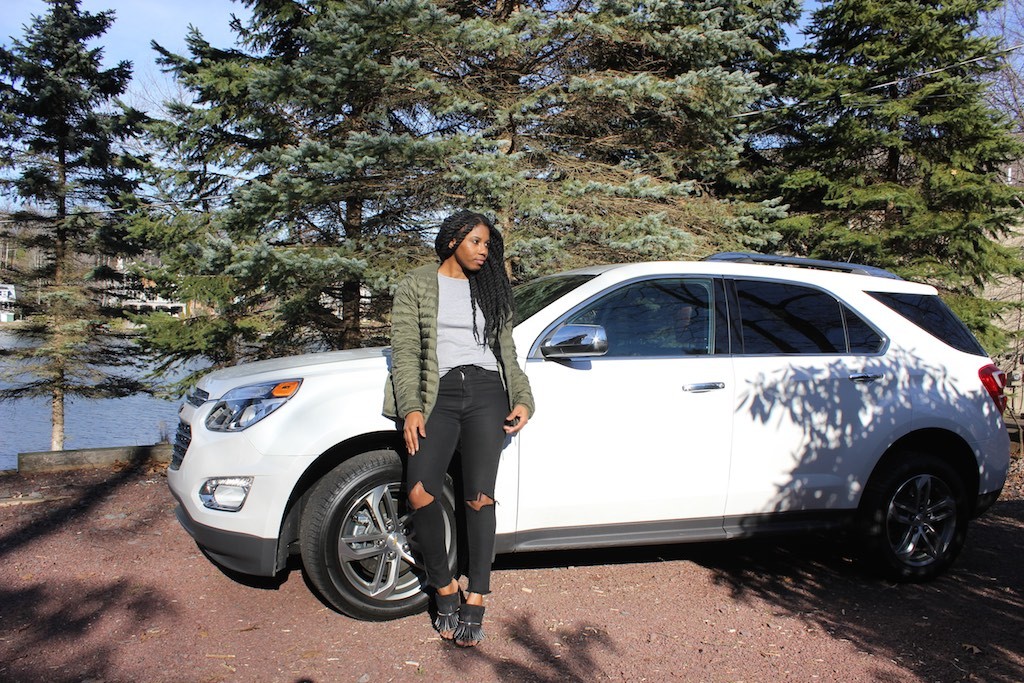 Recently I attended a Chevy Dinner Lab event in Brooklyn with my boyfriend. I’ve been writing for General Motors District Drive for a good while and working with them on car promotions and this event was the first where I actually met the people I’ve been chatting with on the phone and emailing for a year now. I was super excited, to learn more about the new Chevy Malibu and also to experience my first Dinner Lab. Dinner Labs are a cool way to experience a delish 5 course meal with top chefs in the industry and rate the dishes. They are in most cities and set up in warehouses, on docks and generally any cool place that isn’t a restaurant. The food was amazing and my boyfriend was stoked about all the tech features on the Chevy Malibu, some of  which include self parking as well as finding a parking spot for you and notifying you if you can fit or not. Pretty freaking smart of a car. I was amped when I was handed the keys last week to the Chevy Equinox to take a drive for the weekend up to Lake Harmony. 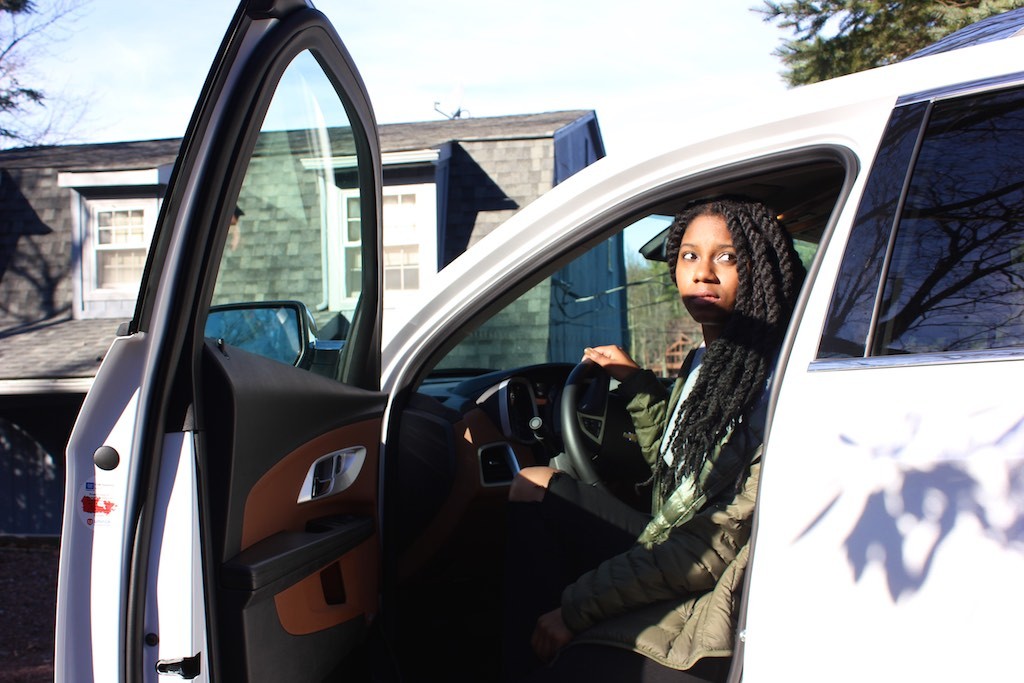 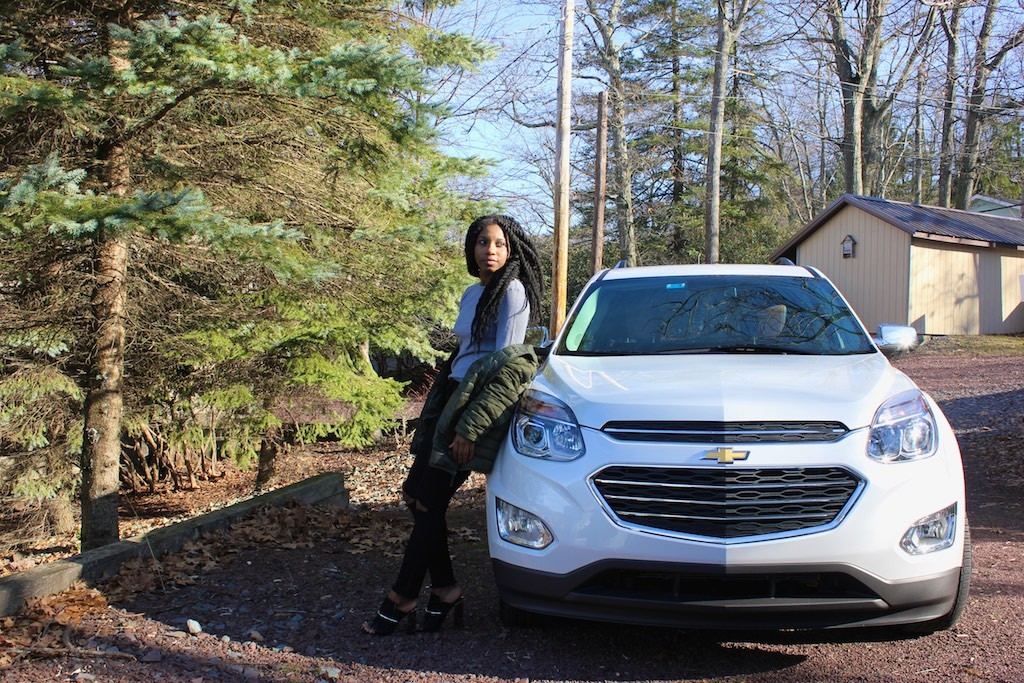 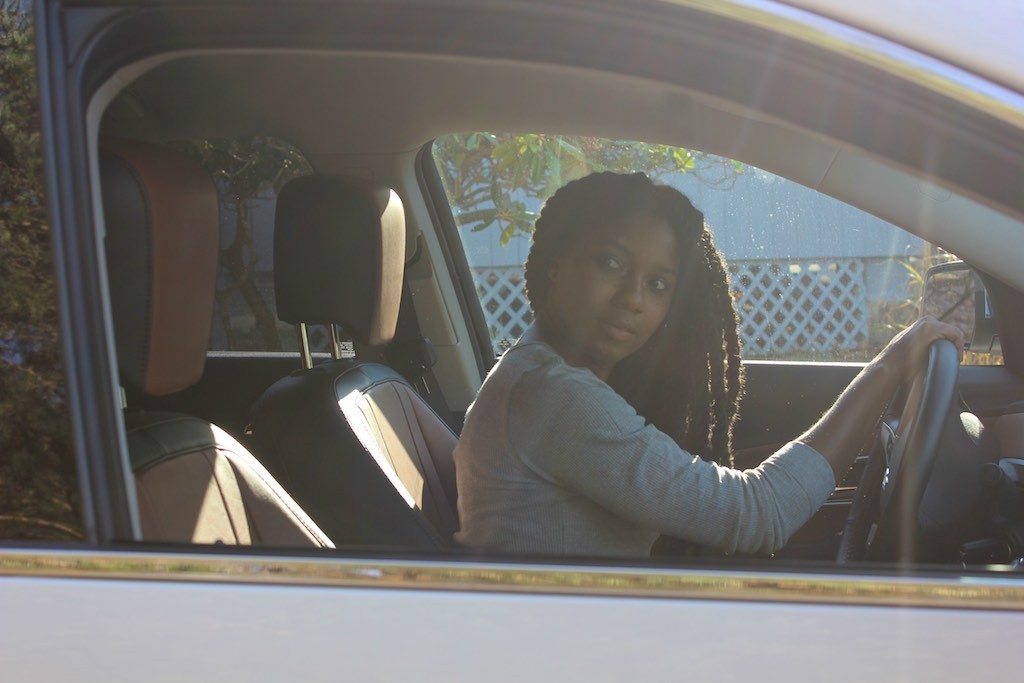 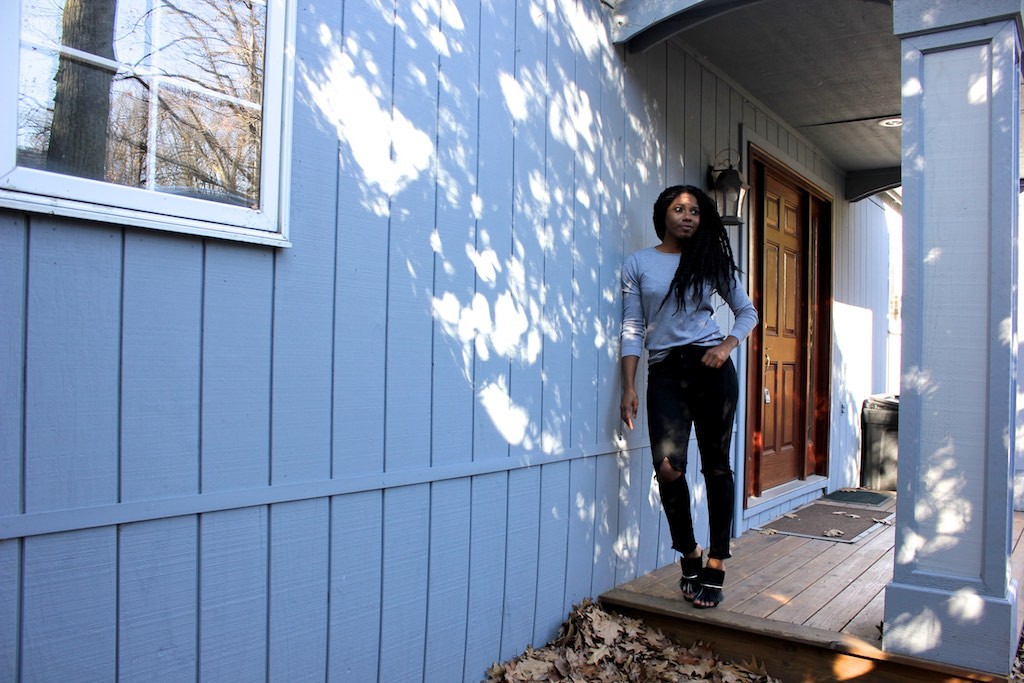 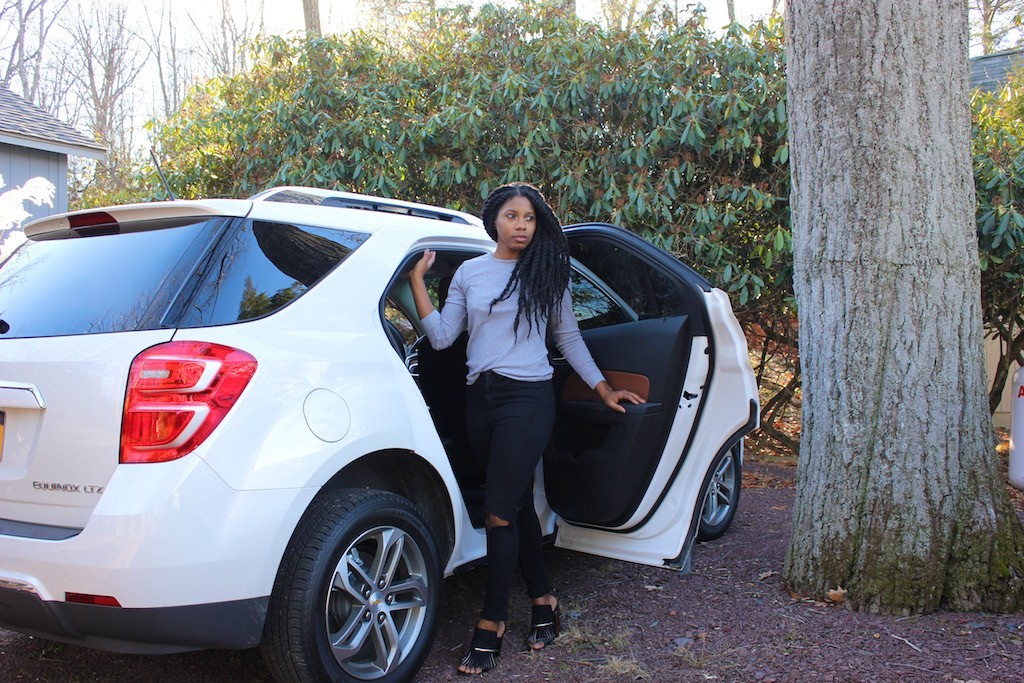 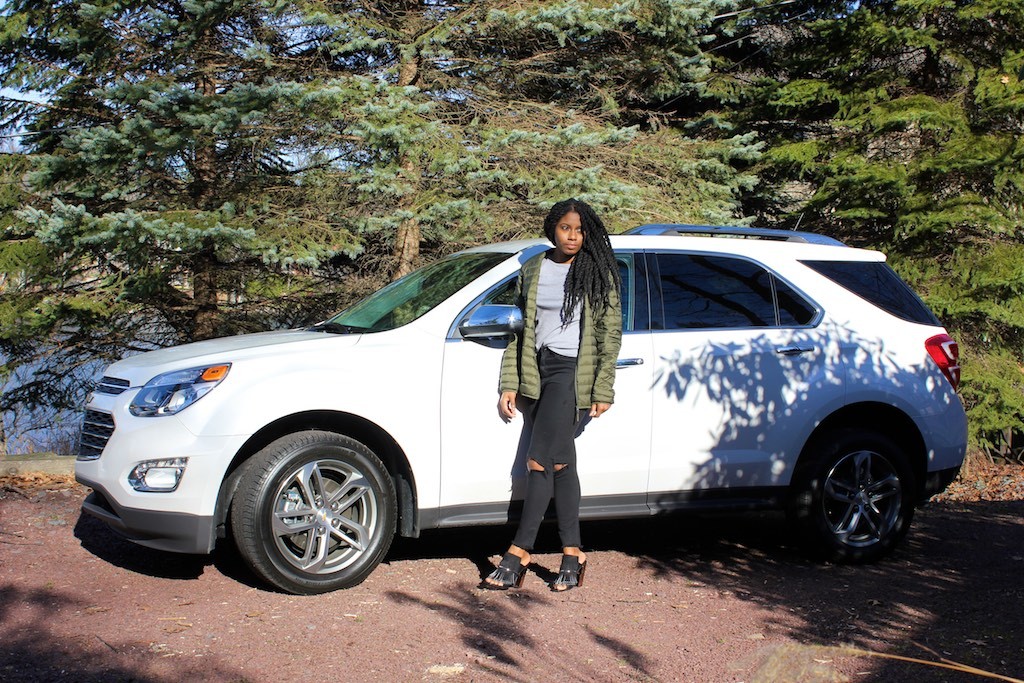 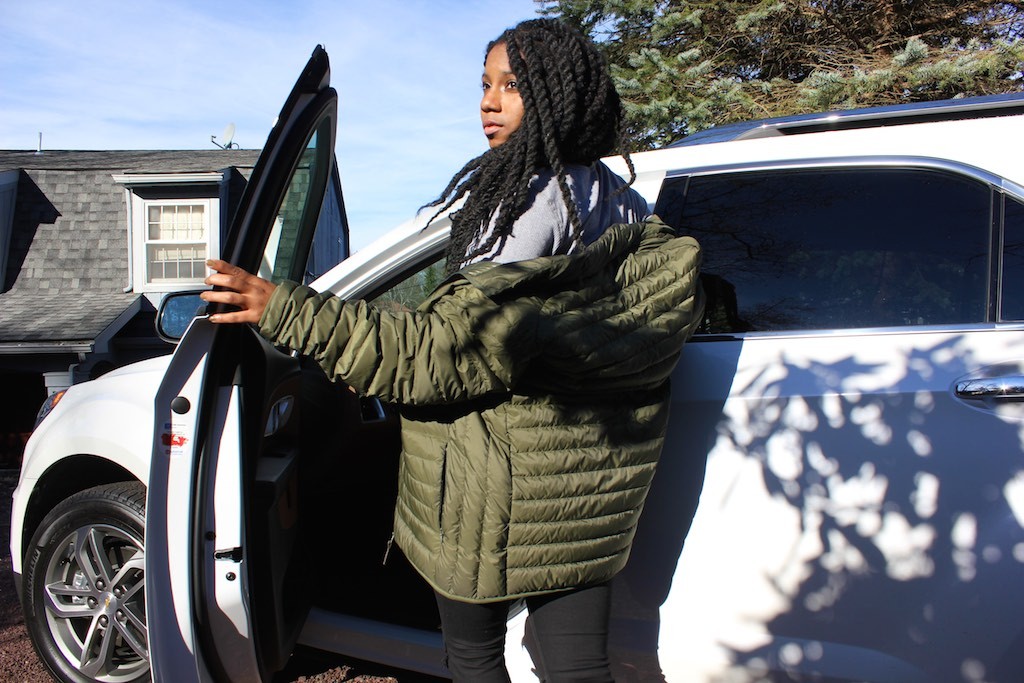 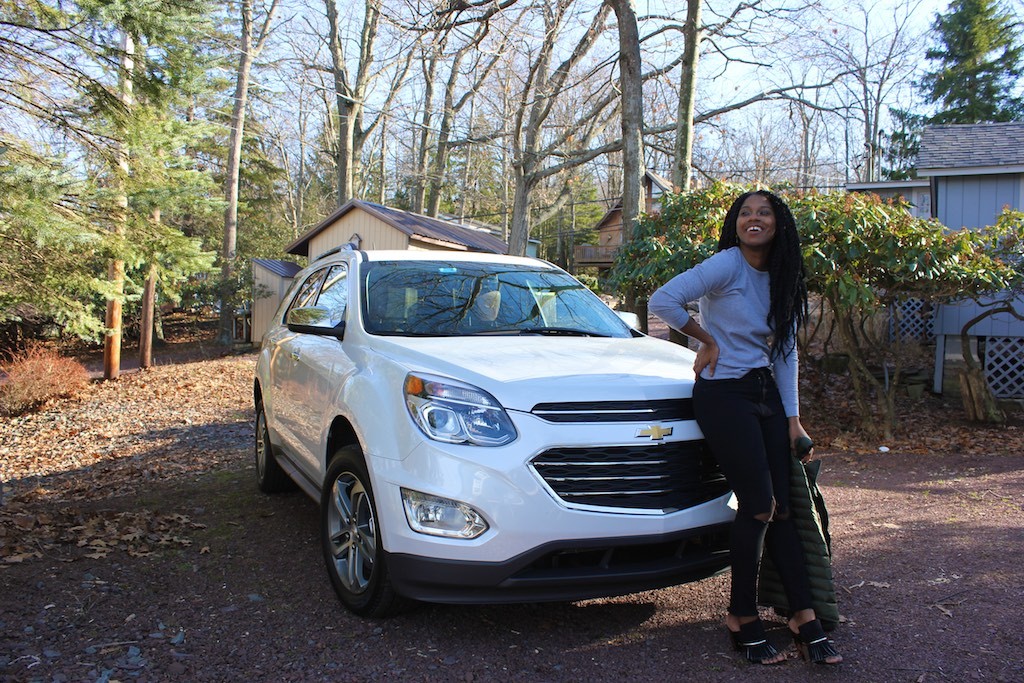 [aesop_content color=”#FFFFFF” background=”auto” columns=”2″ position=”none” imgrepeat=”no-repeat” floaterposition=”left” floaterdirection=”up”]Being a southern girl, I’ve had a car since the Christmas I turned 15. I knew it was coming. I made straight A’s and I was generally a good kid (although I smoked for a year and my parents never knew, but once I took a good health class that came to an end). Mom I hope you’re not reading this. Any who, Christmas day, as soon as I opened my eyes I jumped off my top bunk and looked out the window to the back yard and there she was. A bright cherry red Saturn coup with headlights that flipped up. I WAS IN BUSINESS. I got a job at McDonald’s to afford gas and shoe money and my dad took me driving anytime I badgered him into it which was daily. A few days after I turned 16 I got my license and damnit I was unstoppable, until I was stopped 3-4 times over the next 4 years for “rolling stops” and doing 80 in a 65 zone (which almost got my license revoked and I had to cry and go to court and they later changed the speed limit on that highway to 75 -_-). After I had driven that car into the ground I got a new car and paid that off up through college. I then moved to New York City to attend graduate school at NYU and continued paying off the car for 2 years even though I wasn’t driving it because it was at home in North Carolina being utilized and later totaled by my little sister. Any who, I never thought for a second that I’d bring my car to New York. It just wasn’t necessary. Parking is a nightmare in Harlem. Endless circling and waking up at the crack of too early to move a car to the other side of the street doesn’t appeal to me. On my way to the train in the morning, I see the frustrated faces of those struggling and circling and sitting and waiting and I realize I am just not about that life. New York has stolen all but 10% of my patience. But it’s nice every now and again to borrow a smooth whip from General Motors and get out of the city, like I did recently to Lake Harmony in Pennsylvania. [/aesop_content]

My guy and I went for a weekend of eating, drinking, paint balling and being merry with some of his closet friends. I’ve been driving the Chevy Equinox for just about a week now and I’m absolutely in love with it. It’s a smooth and spacious ride and the scenery into the mountains on winding roads was breathtaking. On the way to work this morning, I drove in from Brooklyn on FDR on the East River and seeing the sun rise over the Brooklyn and Manhattan Bridges and reflect off the tall buildings of the city was amazing. These are the times I miss having a car the most. I also miss the act of driving. It’s very calming and freeing. Nothing but you and the road and your tunes. I LOVED driving when I lived in North Carolina and still do. I never thought about the prospect of having a car in NYC until I started spending more time in Brooklyn where you only have to move your car twice a week on some streets. Now I can handle twice a week over 4-5 times a week in my Harlem neighborhood. So who knows, maybe one day. APPS I USE TO GET PAID FROM SHOPPING