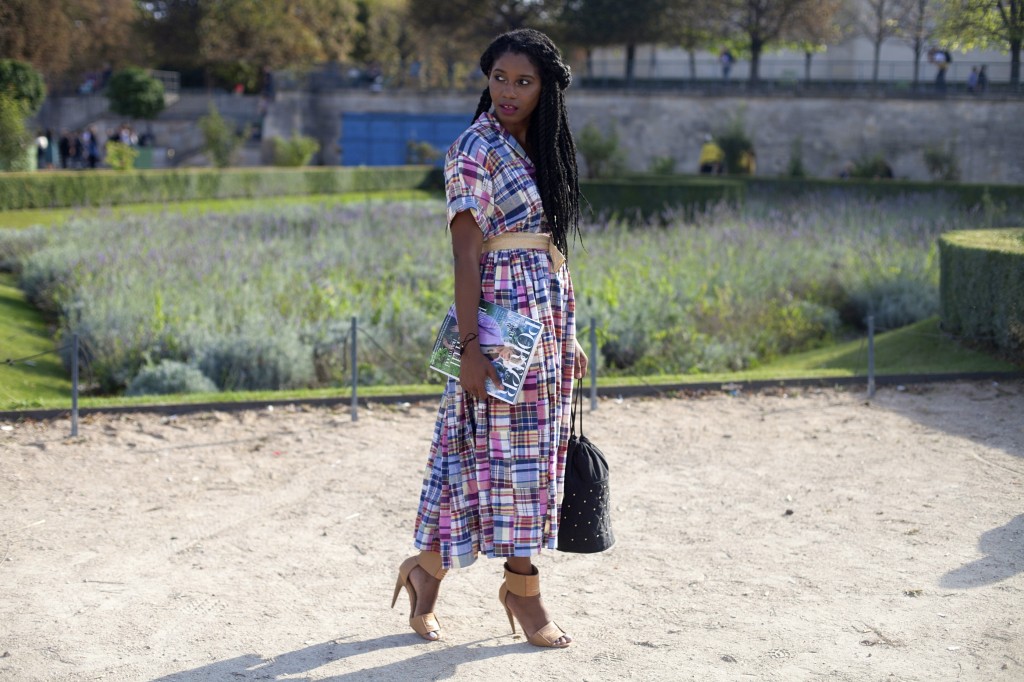 Day 4 of Paris Fashion Week was my favorite. Mainly because I didn’t have any shows until the evening so I had the entire day free to myself. I decided to sleep in a bit. Then I got a little blogging done before getting dressed in my new favorite Cynthia Rowley vintage dress and my new 15 Euro bag from Thanx God I’m VIP and headed over to the Canal for lunch at Chez Prune. Chez Prune is my absolute favorite restaurant in Paris. Sure it’s overrun and sometimes the outside is one large puff of smoke but I adore the food, the ambience next to the canal and the low prices! I’d been trying since the day I arrived in Paris to take Trish and Krystin to eat there but found out they only serve hot food Mon-Fri from 12-4pm. It’s the strangest thing ever. So on my last full day in Paris, I knew it was my only chance to savor the food I’d been craving since last time I was here. 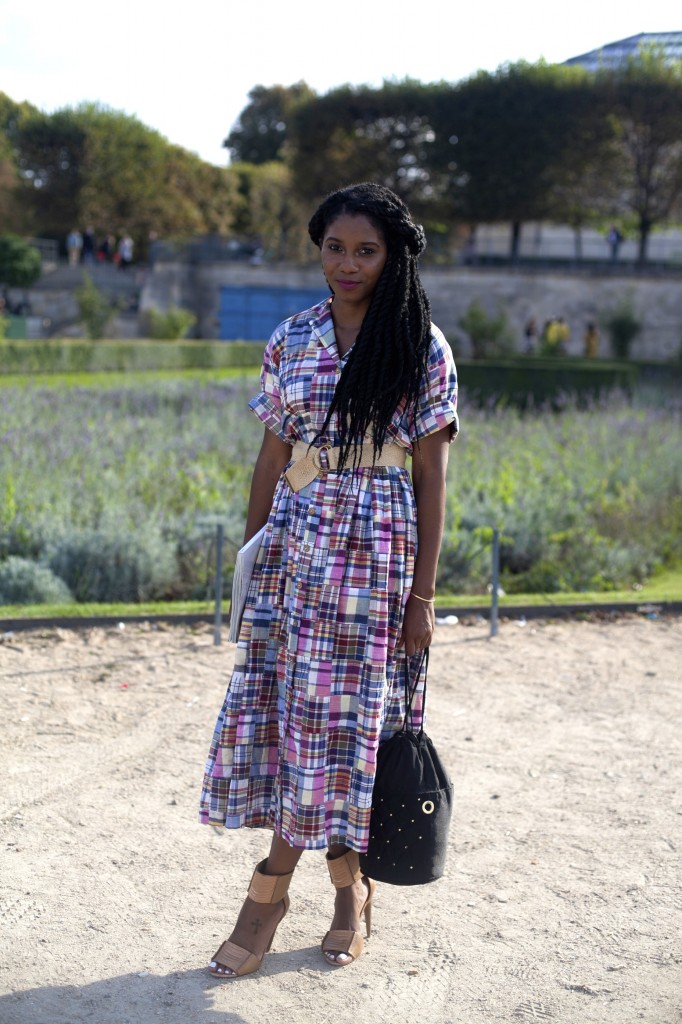 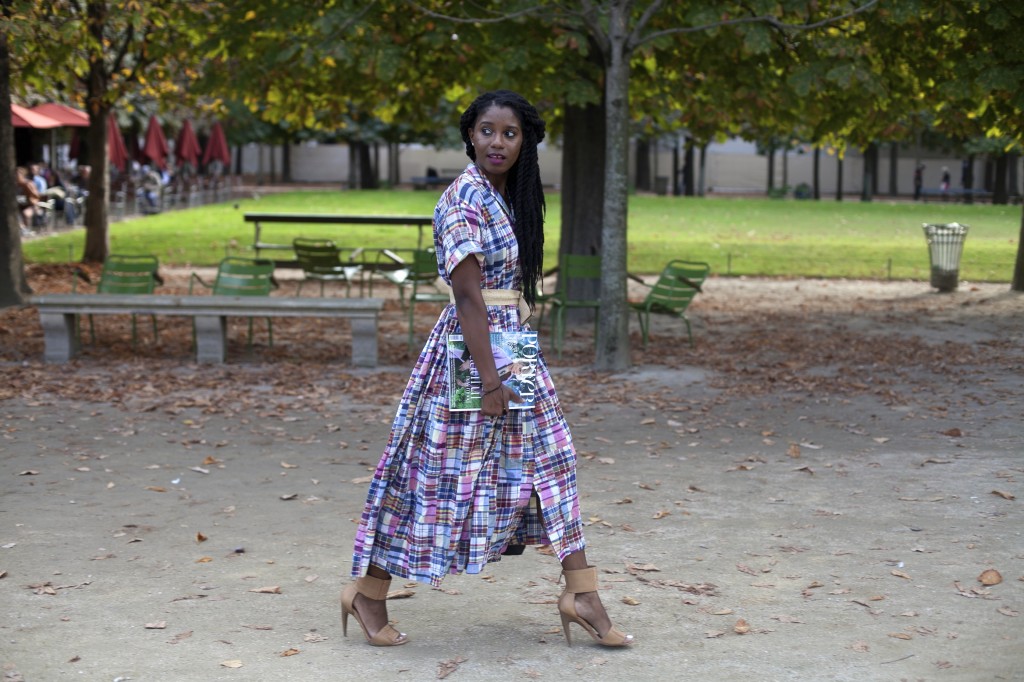 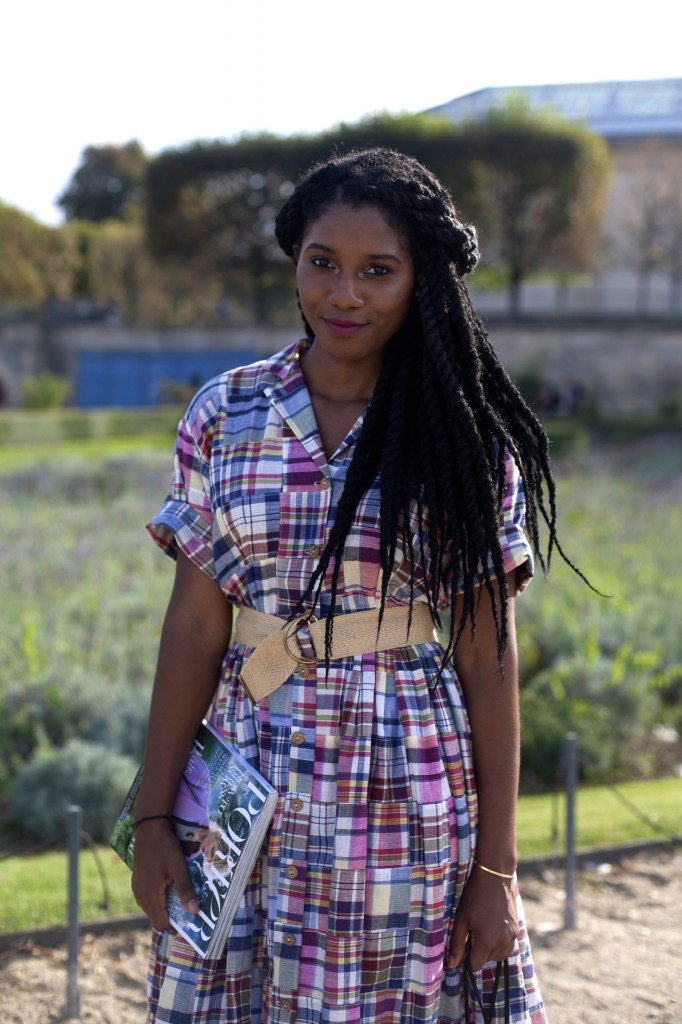 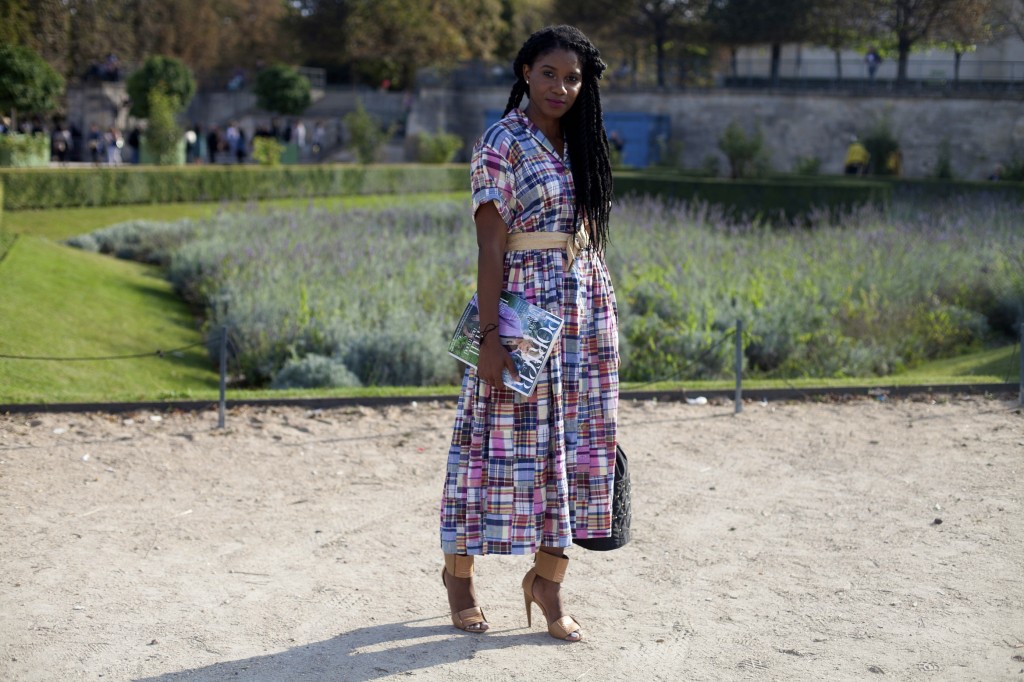 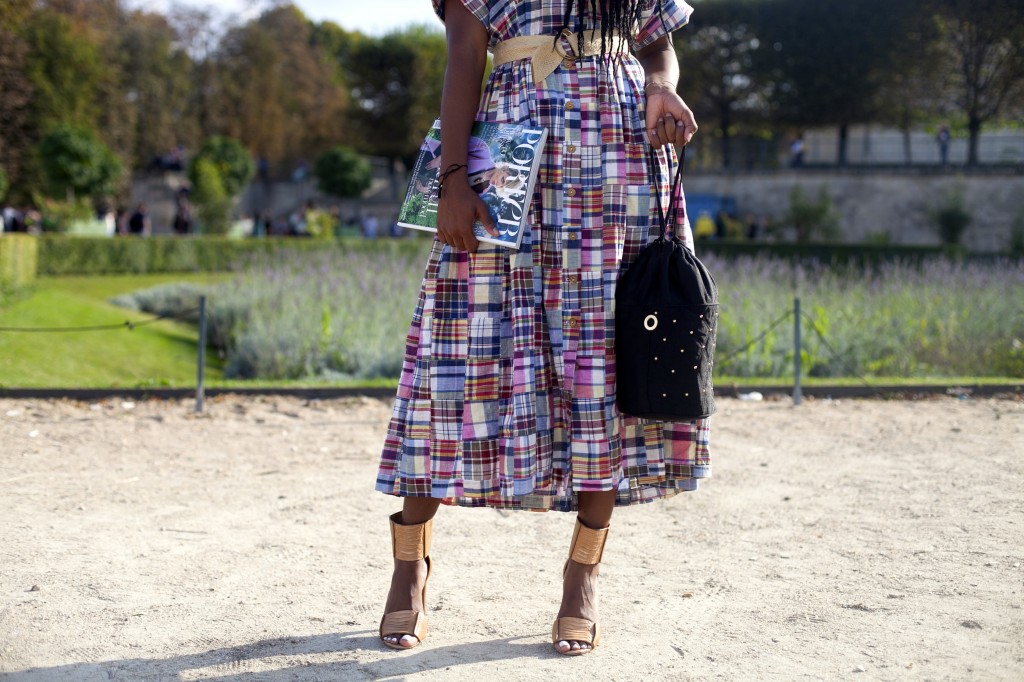 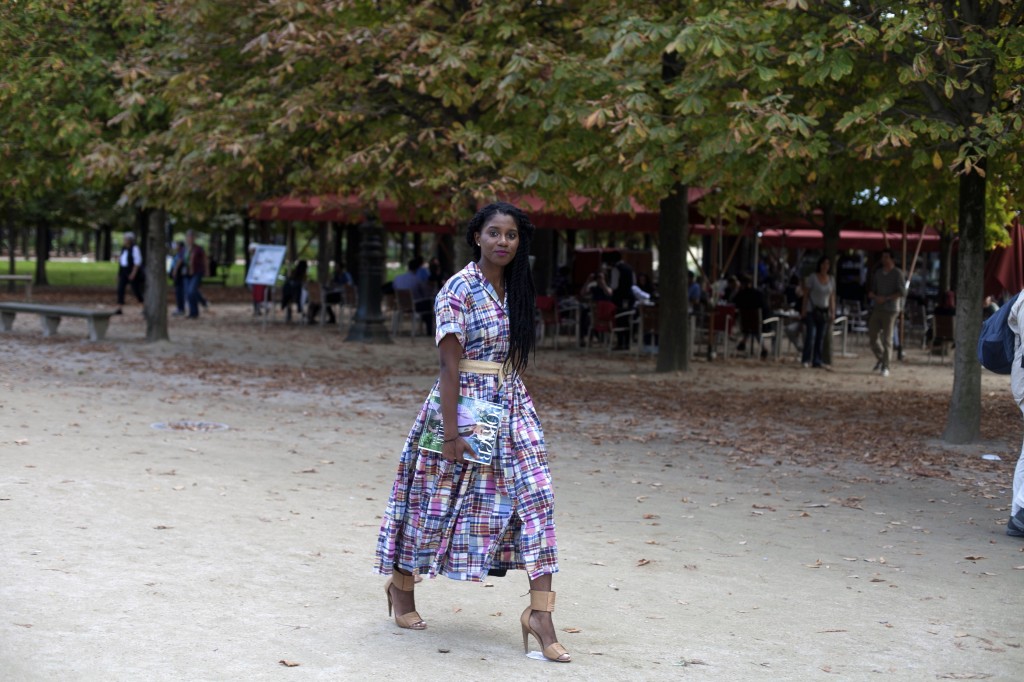 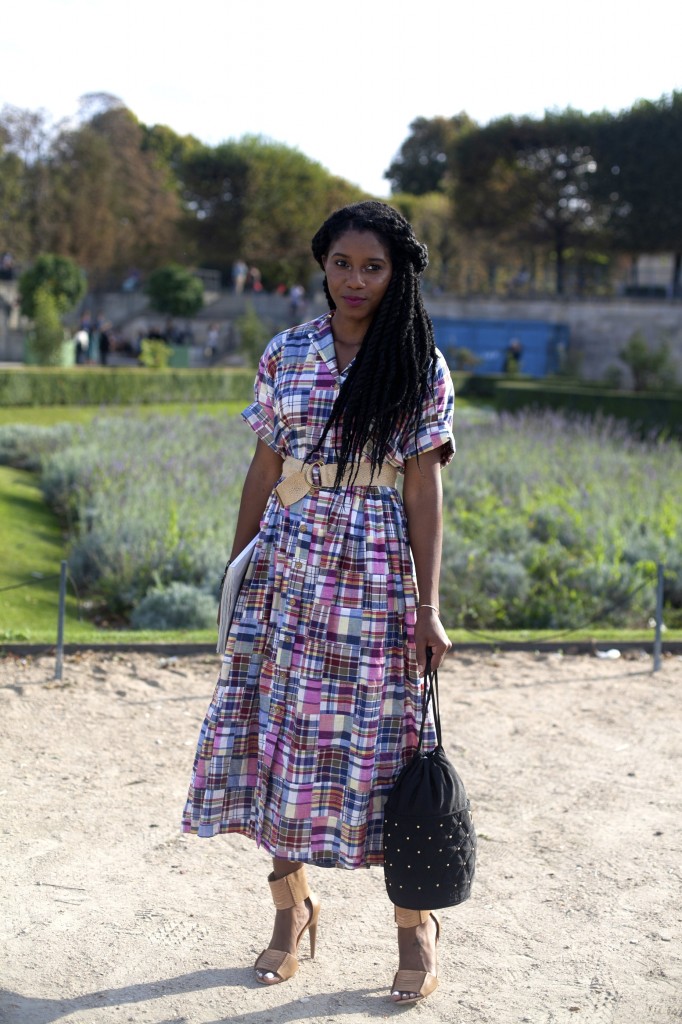 I ordered the fish and it was delightful and savory. Although the ingredients are always minimal the food is always fresh and tasty. The white fish was lightly seared and served with a lemon and cream sauce along with sautéed mushrooms with herbs and a lemon rice, with fresh steamed veggies. IT WAS SO GOOD. I would have licked the plate if I weren’t surrounded by chic frenchmen. After eating, I walked along the canal and snapped a few pictures before heading into a book store and buying the latest issue of Porter Magazine. I then took the train down to Le Marais, one of my favorite neighborhoods in Paris because of the tiny streets filled with thrift and vintage shops. I stopped off in Freep Star and the selection of outerwear was awesome. I have definitely noticed a HUGE HIKE in prices, where as things used to be 20 euros or less, things were now 40 euros and below. Not so much of a thrift! I wasn’t willing to pay those kind of prices so I moved on to Come On Eileen. Come on Eileen has amazing designer vintage and just designers period! But the prices have also risen. It was hard to spot anything less than 50 euros. I headed upstairs for the skirt section and when I found one with suspenders and instantly recognized it as Sonia Rykiel and it was 40 euros…i tried it on and was sold.

On my second day in Paris, I had an appointment to see the Sandra Mansour presentation at the Westin Hotel. It was then that I realized by seeing a huge board when I walked in, that a ton of designers were showing in the hotel. One such was Aquazzura. My new favorite shoe brand by Edgardo Osorio. I really wanted to see this collection, so after thrifting and armed with a business card, I made my way back to the Westin Hotel and up to room 1018 and was greeted by a lovely blonde in a black dress and killer Aquazzura heels. She asked if I was press, my affiliation and I was led into a shoe heaven with a glass of sparkling water. It was lovely. The latest collection is just so well tailored and stunning. There is a sexy woven white sandal, and a lace up red suede sandal with a tassel. It was all so good. I took a TON of photos, but unfortunately I was told not to post any of them because they have so many copiers out there and didn’t want this collection copied before it’s released next year. (BUMMER!) I would have loved to show you all the amazing shoes.

With no more presentations I was interested in crashing, I headed to the tuileries to meet up with Emily outside the Elie Saab show. While walking there I literally ran into Soraya of Style is My Thing. I told her how much I loved her style, and we hugged. Only she had on a straw hat which a piece stabbed me in the cheek and I began bleeding profusely. Luckily she had a tissue and offered it to me. Then she was off and I was there..holding my bleeding cheek in front of a million people watchers and photogs. Luckily I have great clot producing bodies, so it stopped pretty quickly. I had a great time people watching and helping Emily find fashionable people to shoot. We later went for quick bite before I headed home to pack.

NYC don’t forget to get your tickets for Thrift and the City Shopping Tour on October 25th!