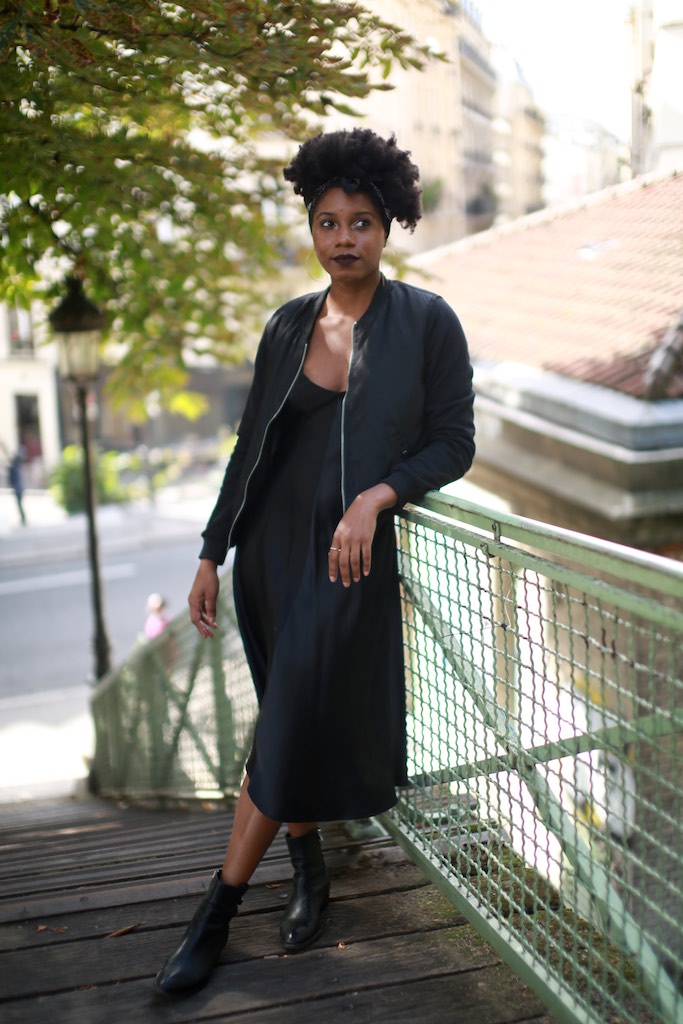 Series: The Slip Dress the only dress you’ll ever need in Paris

When preparing for my trip to Paris, for Paris Fashion Week, I decided I only wanted to bring one dress for the one week trip. I needed something versatile, something chic and something that screamed I could be Parisian! I came to the conclusion that I would invest in my very first slip dress. The color, black, very French. I wanted to do a series of all the different ways this dress could be worn in Paris. I’ve come to know that Parisian closets pale and I mean pale in comparison to the gargantuan masterpieces we have in the states. Many french women simply own a few basic pieces and a few investment pieces and rotate them on a weekly to at most biweekly basis. The leather jacket, skinny black denim jean and ankle boot still reign supreme in Paris by the way. Even my photographer Tatiana was rocking an olive color slip dress that she got at Monoprix (the French Version of Walmart), a maroon pebble leather jacket, and cool light blue well worn sneakers during one of our shoots and she couldn’t be any more simple yet chic. When I asked about the dress because of course I’m gonna ask about the dress she laughed when she said she basically got it at the grocery store for next to nothing. That darlings is style. 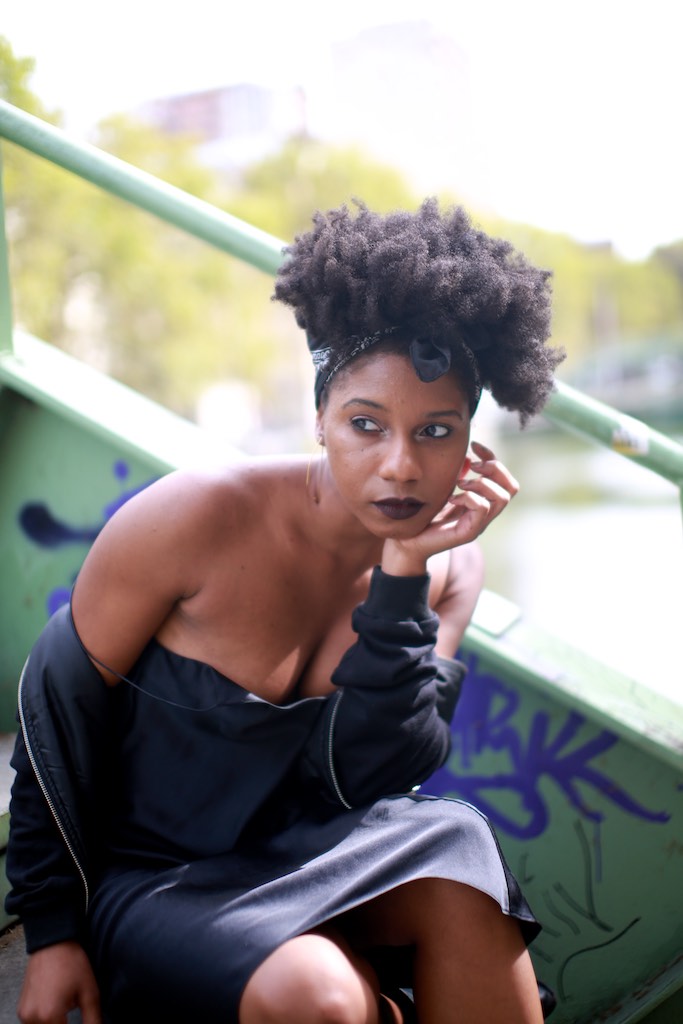 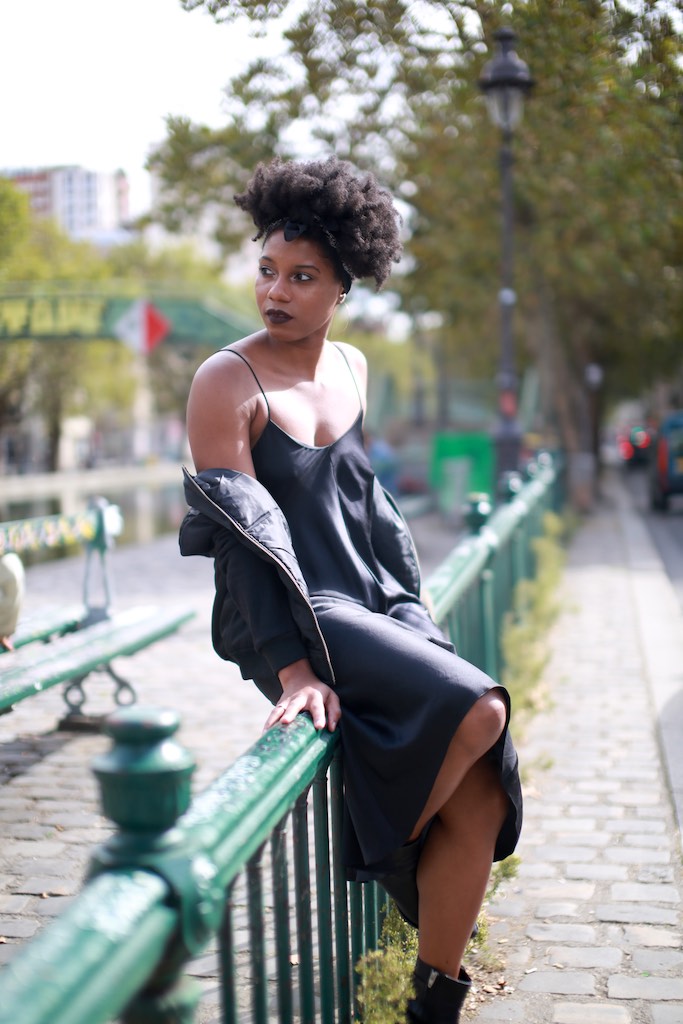 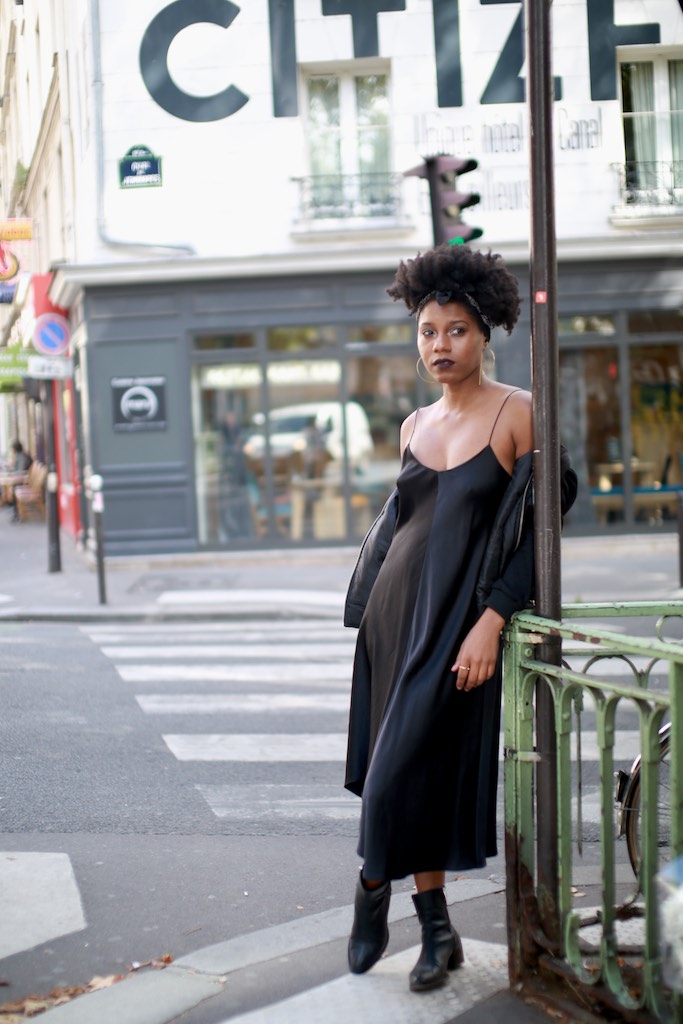 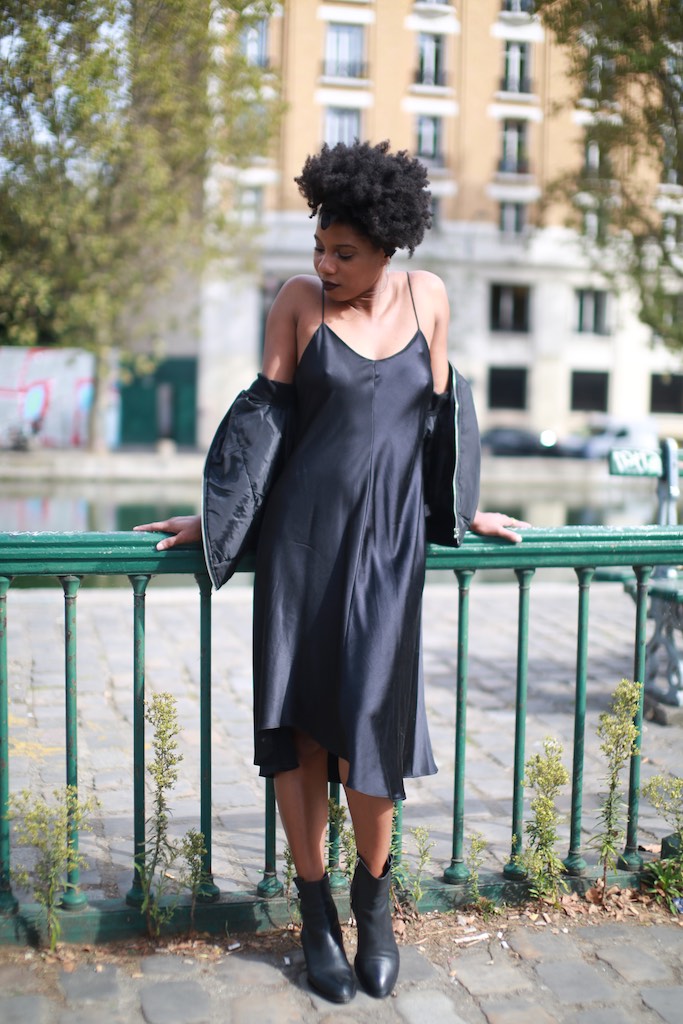 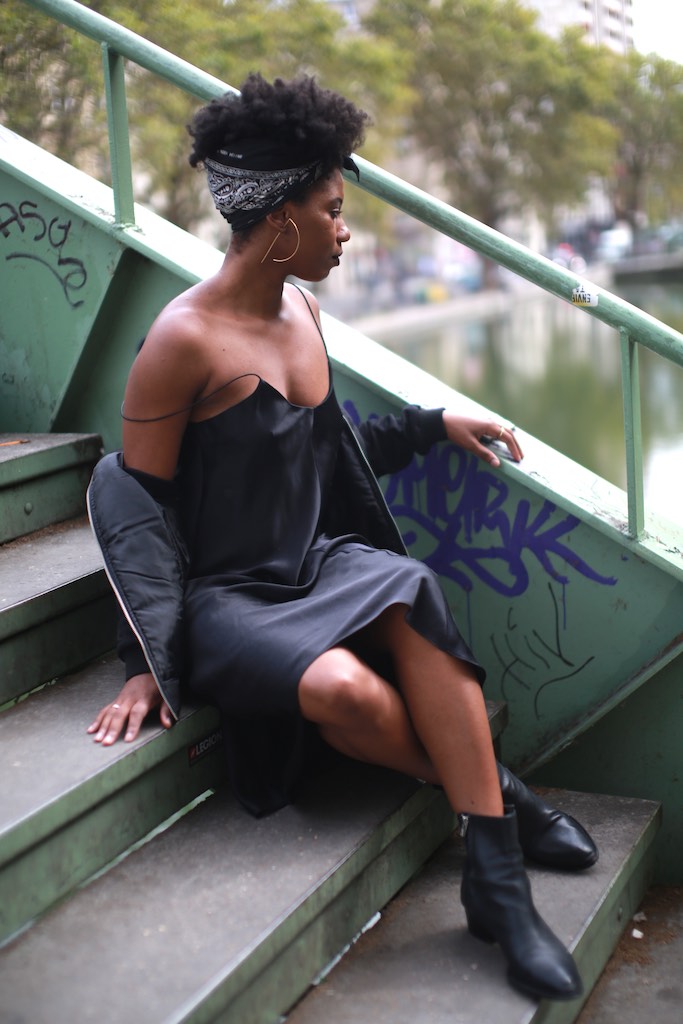 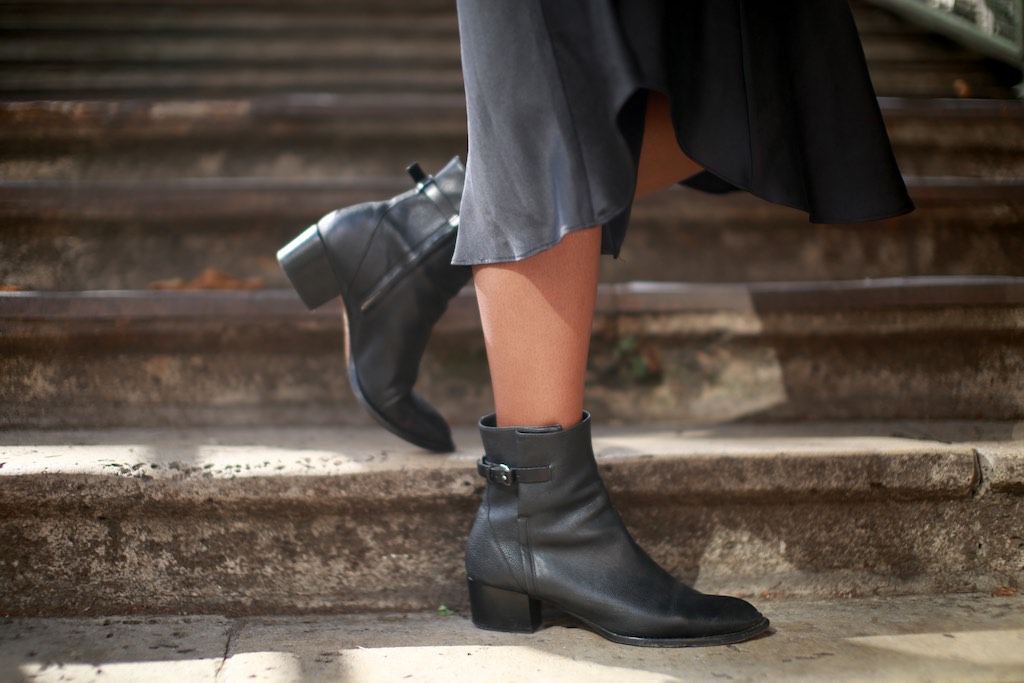 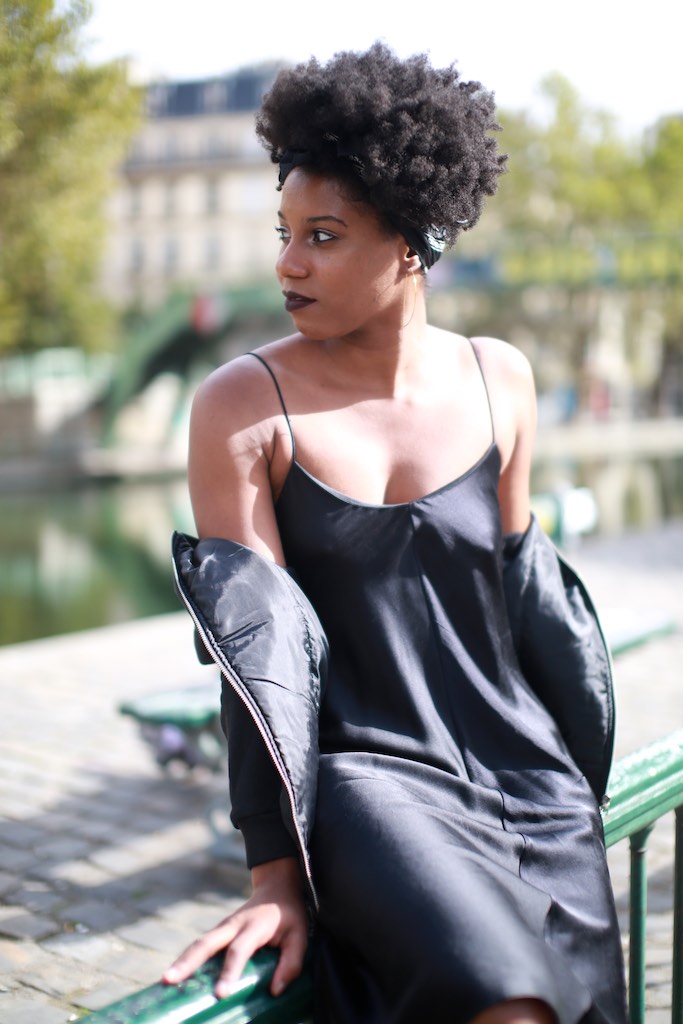 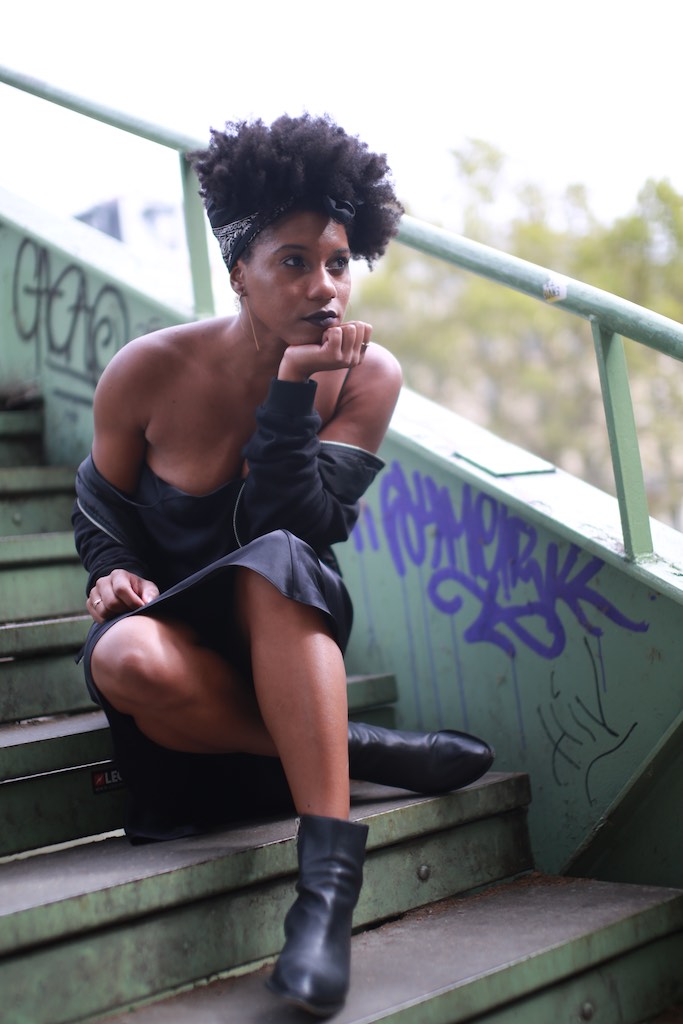 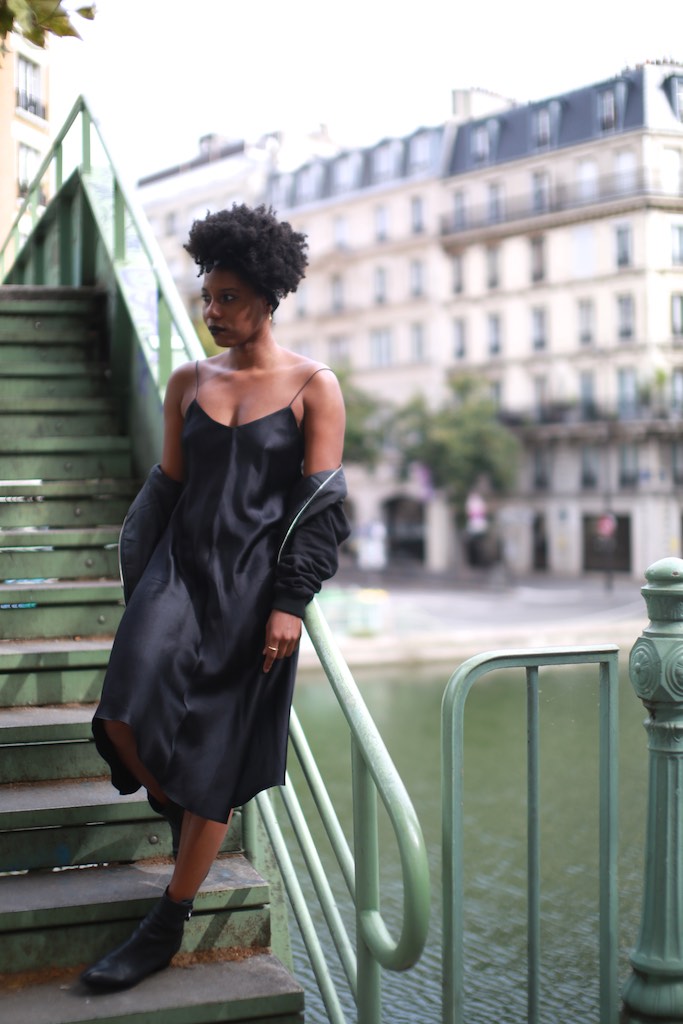 [aesop_content color=”#FFFFFF” background=”auto” columns=”2″ position=”none” imgrepeat=”no-repeat” floaterposition=”left” floaterdirection=”up”]I wore this dress a few times during my stay in Paris and with a few changes it was easy to twitch it up from day to night as well as in between. On this day I wore this dress to an early dinner and drinks with friends on Canal St. Martin. The Canal and the area surrounding it is gritty and a little dirty yet it’s where a lot of artists and creatives dwell and where street art and graffiti is prevalent. It’s the boho area of Paris and reminds me a lot of The Lower East Side in Manhattan, full of tiny eateries and bars and people just hanging out next to the Canal with their bottles of wine shooting the shit with friends. This is not the area for 5 inch stilettos and fur. This is hipsterville Paris style. Canal St. Martin feels like home to me because it was my first foray into Parisian life. I spent the best 2 weeks 3 years ago on

The Canal, learning the bookstores, and boulangeries for the best pastries. I walked every tiny street and know it like I do my neighborhood in Harlem. It’s no surprise I made my way back to Canal St. Martin nearly every chance I got to eat at my favorite restaurant Chez Prune, which now instead of serving hot food from 12-4pm, like the last time I visited, only serves hot food from 12-3pm now. I found that out the hard way one day when I came in at 3 only to be told lunch was over. I actually think I shed a tear. Along the canal is also a very awesome bookstore. I never remember the name but you can’t miss it. It’s filled to the brim with amazing books and I love their fashion section. They also had a coloring book for non-confrontational adults. It was hilarious and I almost bought it but went with a fashion magazine instead.

If you want to feel like a local in Paris, you have to get out of the tourists neighborhoods and into the outskirts. Republique, Canal St. Martin, even though Montmartre is a little cliche these are places tourist rarely stay in because they are a little off the beaten path. Don’t worry these areas are easily accessible by train just like every other neighborhood in Paris. But here you will find the real Paris on those tiny streets, where the pastries are delicious and 2 euros cheaper and where the food is fresh from whatever is brought at the market and a decadent, savory and filling meal will only cost you 13 euros. Sometimes its worth it to step away from the sparkling facade of Paris, and see what lies beneath, while wearing what was traditionally supposed to stay underneath.